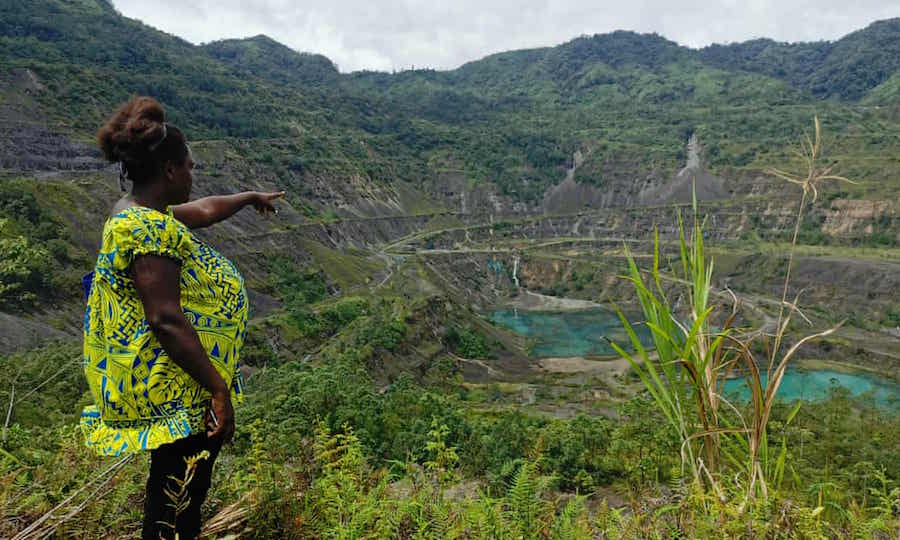 Panguna was once one of the largest and most profitable copper and gold mines in the world, but a new report says it has left a terrible legacy for residents of Bougainville. Photograph: Human Rights Law Centre

Anglo-Australian mining giant Rio Tinto is accused of being responsible for “multiple human rights violations” after its Panguna mine on the island of Bougainville left people with a dangerous legacy of poisoned water, polluted fields and a ruined river valley, according to a damning report from the Human Rights Law Centre.

The HRLC says the mining company has an obligation to return to the island, which has just voted in favour of independence from Papua New Guinea, for reparations and reconciliation.

For 17 years until 1989, the Panguna mine was one of the world’s largest and richest copper and gold mines, run by Rio Tinto subsidiary Bougainville Copper Limited. Mining ended at Panguna 31 years ago, after disputes over the mine’s profits and its environmental damage led to a decade-long civil war in Bougainville that killed up to 20,000 people. But the mine pit remains a huge scar in the landscape in the centre of Bougainville island and has left a deadly legacy for residents.

“Polluted water from the mine pit flows unabated into local rivers, turning the riverbed and surrounding rocks an unnatural blue. The Jaba-Kawerong river valley downstream of the mine resembles a moonscape, with vast mounds of grey tailings waste and rock stretching almost 40km downstream to the coast.”

The report was compiled through interviews with 60 locals in the areas downstream from Panguna and also draws on more than 300 interviews conducted under a research project run by the Catholic Diocese of Bougainville.

The report alleges that many villages have been left without clean drinking water, which must be piped long distances or rely on rainwater tanks that frequently run dry. Many families have no option but to continue to use the polluted rivers for bathing and washing.

Those who live in the river valleys have reported serious, long-running health impacts, including sores and skin lesions, diarrhoea, respiratory problems and pregnancy complications.

The hasty closure of the mine, and the lack of remediation since, means monsoonal rains push massive volumes of polluted tailings sand into the rivers, destroying forests and agricultural land. River crossings also become dangerous, with shifting sand channels and areas of quicksand. Locals reported children drowning or sustaining serious injuries trying to cross rivers.

“The Panguna mine devastated our communities physically and culturally and we are still living with the consequences,” said Theonila Roka Matbob, a teacher and traditional landowner from Makosi village, downstream from Panguna.

“Our land is destroyed and our rivers are poisoned. Kids are drinking and bathing in the polluted water and getting sick. We urgently need Rio Tinto to come back and deal with these problems so our communities can find healing.”

Rio Tinto divested from the mine in 2016, giving its 53.8% interest in Bougainville Copper Limited (BCL) to the Papua New Guinea government and the autonomous Bougainville government. The HRLC report says the company “walked away without having contributed to the clean-up or rehabilitation”, a move that “appears to have been part of a deliberate corporate strategy by Rio Tinto to divest itself of high-risk, high-liability projects”.

A spokesman for Rio Tinto said: “BCL was compliant with applicable regulatory requirements up until the mine’s operations were suspended in 1989.”

Since abandoning the mine in 1990, Rio Tinto has not had access to the mine site because of the conflict and ongoing security concerns. The spokesman said it acknowledged concerns raised in the HRLC report but could not comment because it had not been able to see the mine.

“Indeed, the ongoing extremely challenging security situation was one of the reasons for the 2016 share transfer,” he said. “We believe the best means of addressing any current issues is through the owners of the mine working directly with the people of Bougainville.”

But the president of the autonomous Bougainville government, John Momis, said Rio Tinto’s decision was “remarkably unprincipled, shameful and evil”, accusing the company of deliberately sidestepping its responsibility to clean up the damage it had allegedly wrought.

Report author Keren Adams said Rio’s decision to “cut and run” from Panguna was “an appalling breach of its responsibilities”.

“We spoke to children with skin ulcers that never heal. We heard from families whose loved ones had drowned trying to cross rivers flooded with mine waste, and women who now have to walk two hours every day to lug water back to their communities because their nearby creeks are now poisoned by copper,” she said.

“This is not a historical issue, it is an ongoing human rights disaster and Rio Tinto must immediately act to address it.”

The future of Panguna has been re-animated by political developments in Bougainville, an autonomous region of Papua New Guinea since 2005. In December 2019 the province’s people voted overwhelmingly for independence, with 98% in favour. There is renewed interest in reopening Panguna and establishing new mines in the region.