New Report Warns of an Unprecedented Wave of Land Privatization

Amidst a worsening climate crisis, the Oakland Institute’s new report, Driving Dispossession: The Global Push to “Unlock the Economic Potential of Land” sounds the alarm on the unprecedented wave of privatization of natural resources that is underway around the world. Through six case studies – Ukraine, Zambia, Myanmar, Papua New Guinea, Sri Lanka, and Brazil – the report details the myriad ways by which governments – willingly or under the pressure of financial institutions and Western donor agencies – are putting more land into so-called “productive use” in the name of development.

“The fact that most of the land on our planet, especially in the Global South, is public land or land held under customary tenure systems is seen as an obstacle to exploitation and economic growth,” said Frederic Mousseau, Policy Director of the Oakland Institute and the lead author of the report. “Governments are being pushed to adopt the Western notion of private land ownership to give corporations access to natural resources – land, water, and minerals – just the opposite of the drastic shift we need to win the struggle against climate change”.

Driving Dispossession highlights the United States as a key player in an unfettered offensive to privatize land around the world via US blockchain corporations, government agencies, and the World Bank. In Zambia, the Bank has partnered with a subsidiary of the US-based online retailer Overstock.com to use blockchain technology for land titling with the goal of “unlocking trillions of dollars in global mineral reserves that are inaccessible due to unclear land governance systems.” In Sri Lanka, the Millennium Challenge Corporation, a US government entity, is targeting state land – it intends to map and record up to 67 percent of the country to “promote land transactions that could stimulate investment and increase its use as an economic asset.” In Ukraine, the World Bank and the International Monetary Fund leveraged the economic fallout from the COVID-19 pandemic to coerce “Europe’s breadbasket” into putting its agricultural land for sale in a land market. 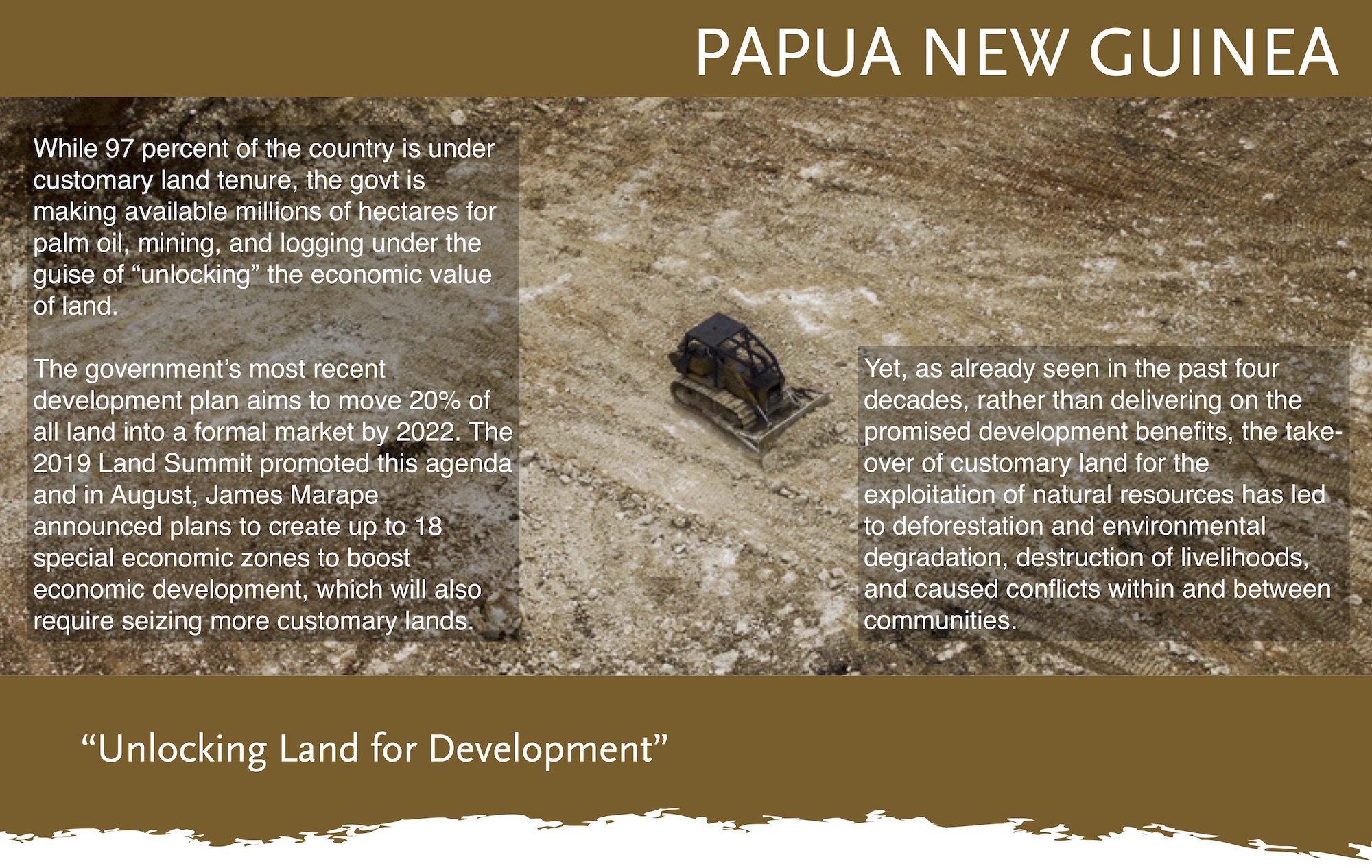 The same logic is at play in Myanmar. In 2018, the Vacant, Fallow, and Virgin Land Law was amended to boost economic development by making so-called “vacant” lands available for agriculture, mining, and other purposes. In Papua New Guinea, where 97 percent of the land is customary, the government wants to “unlock” this land so it can be “mobilized” and put in “productive use” to ensure “private sector growth.” In Brazil, Bolsonaro has been aggressively expanding ranching and exploitation of the Amazon at the expense of the Indigenous People and the forests they live in and steward.

Driving Dispossession also provides a striking compilation of offers made by governments to attract investors. Hundreds of millions of hectares of land are being made available, including from some of the poorest countries, which raises serious concerns about this “development” strategy and the ability to eventually curb the overexploitation of natural resources. But local communities, civil society organizations, and Indigenous People are standing up to resist and preserve their livelihoods and the environment, as documented in the report.

Privatization of land is being touted as a development imperative. Driving Dispossession debunks the myth that it leads to human development, and provides a strong rebuttal to the Peruvian economist Hernando de Soto’s pseudo-scientific thesis about the positive impact of titling, often cited to back such policies.

“This push to privatize land threatens people and the planet at a time when we need urgent action to curb carbon emissions and protect livelihoods. Governments and international institutions must halt the privatization of the commons and instead move decisively to protect natural resources for future generations".