Shark callers fear destruction of their culture through seabed mining The trumpet of the conch signals the end of a hunt. (Supplied: New Ireland Provincial Government)

Before dawn breaks, the shark callers of Papua New Guinea board their canoes.

They have been preparing for this day for many weeks, isolating themselves from others in their village in the northwest of the island of New Ireland.

Dressed in large, woven headdresses with their faces and bodies decorated in red and ochre paint, they guide around 20 outriggers many miles from the volcanic shores of the island into the Bismarck Sea, until the land is no longer visible.

Out in the deep ocean, the men sing to the sharks and shake necklaces strung with coconut shells and black seeds to lure the fish out.

It is not easy to catch the sharks – often they thrash and swerve in the water trying to bite the men – but usually, two or three sharks are killed and taken back to the village to eat.

Those that are too young are released back into the wild.

It can get dangerous at times, but Chief Pawut from the Kuk clan explains that if the men are well prepared, they should have nothing to fear.

"When the shark comes up, they won't eat you because you have protected yourself," Chief Pawut said.

"We believe all our ancestors, they will protect you. All the spirits will uphold you and protect you in the sea."

While still at sea, the shark callers blow into their conch shell to inform the village of the outcome of their hunt – the trumpets reach villagers waiting patiently on the beach.

Only a select few men participate in the ritual that stretches back centuries, passed on from generation to generation, and practiced only on special occasions. 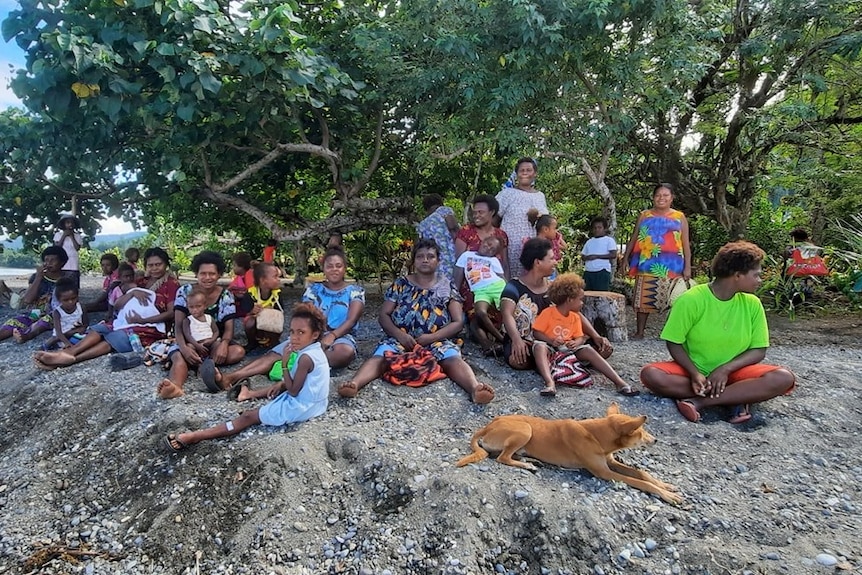 Women and children wait patiently for the shark callers to return from their hunt.(Supplied: New Ireland Provincial Government)

"It's held as a part of our identity and symbol in our culture," Chief Pawut said.

But last week, the ancient cultural event took on a new role.

The shark callers wanted to highlight their fears around a new, experimental mining activity they believe threatens their way of life.

"When they start doing the seabed mining they're going to spoil the whole place, [including] us," Chief Pawut said.

Who are the shark callers? Only Vincent Mangas caught a shark during the ceremony.(Supplied: New Ireland Tourism

Tradition has it that the shark callers are always males.

For up to two months before the hunt, they are not allowed to eat wild pig or crayfish, and strictly limit their meals.

The men also isolate themselves from the rest of the village and maintain strict rules around their relationships with women.

"They have to go into the bush, a kind of place they call 'tareyu' in our language," said Sheillah India, vice-president of the Tikana local government in New Ireland. The village prepares for the hunt.(Supplied: New Ireland Tourism)

The men are even forbidden from eating food that women have prepared and instead cook and eat food by themselves.

"Everybody has to remain in the men's house for the ritual and fast before they go out," Chief Pawut said.

"If you don't do that, you spoil everyone going out fishing."

The people of New Ireland say the sharks are "wily animals" that can smell those who are up to no good. Women also participate in the ceremony, though they aren't allowed on the hunt.(Supplied: New Ireland Provincial Government)

If the shark caller has behaved properly, then the shark's sacrifice will result in meat for the whole clan.

This week, only one man caught a shark – and Chief Pawut believes that was because most of the shark callers had not followed the ritual before heading out.

"Nowadays, the people they just went there thinking it's one of their hobbies," he said. The mineral-rich area off the coast of New Ireland where the shark callers hunt has attracted mining interests.(ABC News: Jarrod Fankhauser )

As a result of hydrothermal vents in the Bismarck Sea, New Ireland has been slated to become a testing ground for a new frontier of mining.

A controversial deep-sea or seabed mining venture, called Solwara 1 developed by Canadian company Nautilus and backed by the PNG government, was expected to be developed to extract lucrative rocks from the seabed of the Bismarck.

Amid international protest, the project and company collapsed in 2019 before mining even began, but other similar initiatives are being considered around the Pacific region.

Just last month, the Pacific nation of Nauru moved to fast-track the industry, by setting a two-year deadline for rules governing deep-sea mining in international waters to be finalised.

The shark callers want to set a national ban on the activity, and make sure deep-sea mining is never proposed in their waters again.

"We are fighting the battle not to entertain the seabed mining," Chief Pawut said.

"It will affect the shark calling."

"The message is basically pretty simple and straightforward – development doesn't have to be about sacrificing our life, livelihoods, and our environment," Mr Schulze said.

He said if the shark callers were no longer able to practice their ritual because of the mining, it would devastate their communities.

"Culture is basically the biggest guide to how New Islanders live their life … if you kill the culture, you basically kill the purpose to live."