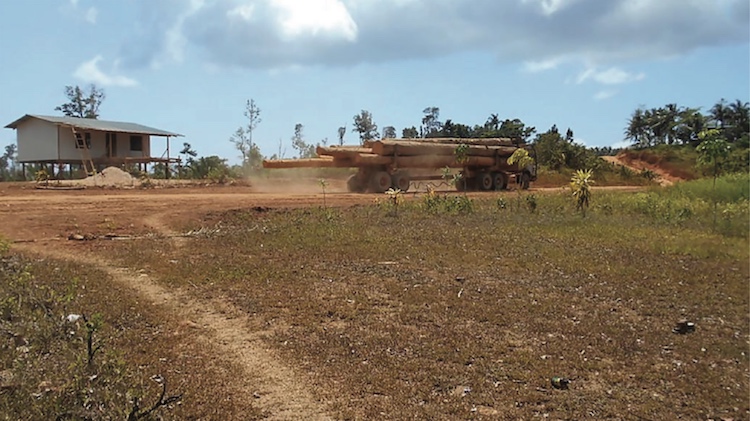 In 2015, anthropogist Jason Roberts spent months living with the people of New Hanover, documenting their lives and the impacts of large-scale logging and land alientation.

His findings paint a grim picture of the negative impacts of large-scale logging and agriculture projects on subsistence communities and the additional burdens they create for women in particular.

New Hanover is home to approximately 29,000 people who have historically lived a subsistence lifestyle that is tied to the land. Local people have traditionally been self-sufficient, making their living as shifting horticulturists, growing taro, sweet potato, banana, cassava, sago and greens. They raised money through the small-scale trade of cash crops including betelnut and copra.

When the SABL leases were issued people expected their lives to improve and to see their communities develop.

As one man explained, ‘They said the project would benefit everyone. The company would make permanent houses for all of us, provide metal roofing, build roads to all the villages, give good royalty for timber, and plant crops so we could continue to make money.’

The reality though was very different.

Although the logging companies, Joinland and Tutuman Development exported almost 700,000 cubic metres of logs worth US$70 million between 2008 and 2018:

When the company came here and actually started to work, everything went all wrong. Development didn’t happen.

While the newly minted directors of the local landowner company and their families did receive cash from the logging company and get better houses, they were the only ones to benefit and then only in the short-term. This preferential treatment initially created anger and confusion that spurned violent protests on the island against the logging that had to be forcefully suppressed by the police. The police then stayed on, becoming an ongoing presence in the logging camps.

Inequitable benefit distribution has left an engrained sense of antagonism and division among and between villages on the island. Some people and families are now isolated from others within their communities despite being inter-related and closely situated. This is in marked contrast to the previous egalitarianism and reciprocity experienced on the island.

Although a few families did receive new kit houses, most families still live in traditional bush material homes, although they have become more difficult to maintain as a result of forest clearance. There was little other new infrastructure provided by the logging company, a small aid and unfinished classrooms being the only signs of development.

Even the kit houses are viewed with distain, because of the cheap construction materials and the tin roofs which make the interiors very hot.

Indeed, the whole island nows seems a hotter place to local people with much of the shade and moisture generating forest now cleared and replaced by dry and dusty plains.

When the 2015 El Nino draught struck the region, women and children were forced to walk long distances each day to collect water and bath as local streams, exposed to the sun by logging, had dried up or filled with soil washed off the logging roads.

Gardens, already under stress from a loss of topsoil and shade, also faired badly and families were forced to plant crops in a sago swamp to act as a reserve seed root bank from which to begin again when the drought ended. Logging also caused water pollution and sedimentation that decimated the stocks of fish and seafood the people had previously relied upon as their main source of protein.

Ironically, because of the loss of gardens and other food sources caused by the logging, even the landowner company executives and their families were little better off because they had to use their benefits to pay for things that had once been free - garden produce, fish, fruit, coconuts, betelnut, mustard and tobacco.

The logging was also blamed for increased levels of sickness caused by all the dust that was kicked up by the logging trucks and the wind.

Perhaps inevitably, it was women who have suffered more than anybody. They have to spend more time growing and preparing food, caring for sick children and relatives, finding clean water, keeping their homes free of dust, accessing bush materials for repairs and doing tasks traditionally undertaken by their husbands if they find work with the logging company.

Overall, the SABL leases, promised agriculture projects and the logging have left the people of New Hanover with a broad sense of resigned disappointment and loss. Disappointment at the imbalance between the project benefits, which were captured by a few, and its costs which were shared by everyone, the breakdown of proper social norms and communal living and the seemingly intractable, systemic corruption infecting government officers and community leaders.

All the promises of local growth and employment had proved to be false. No new industries had been established to provide new jobs and incomes. People were simply left to work harder at the things they have always done while suffering the environmental and social harms.

This article is based on the paper, '"‘We Live Like This’: Local Inequalities and Disproportionate Risk in the Context of Extractive Development and Climate Change on New Hanover Island, Papua New Guinea”, published in the Oceania journal Vol 89(1). The full paper can be read and downloaded here