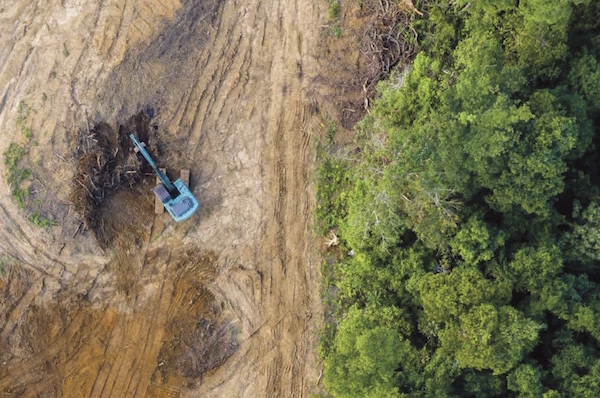 Download this article as a PDF - Illegality and Human Rights Abuses

The logging industry in Papua New Guinea (PNG) has faced widespread reports of illegality. While almost all logging in PNG is licenced in some way, there are frequent breaches of the law in granting of licences and the operation of logging concessions. For this reason, most of PNG’s log exports should be considered illegally logged.

97% of PNG’s land area is under customary ownership, and PNG law requires the consent of customary landowners for most kinds of logging permits.[1]  International law also recognises the rights of Indigenous peoples to give their Free, Prior and Informed consent to development that affects their land. Despite this, government reviews in 2001 and 2004 found that customary landowners were, in general, not giving informed consent to logging operations on their land.[2]  Research conducted since that time has also found repeated instances of logging operations taking place without informed consent from landowners.[3]  In particular, a government review found 90% of Special Agricultural and Business Leases it examined did not have genuine landowner consent (see below).

Illegal issuing, extension and use of licences and permits

While PNG’s forestry laws and regulations are detailed and relatively strong, implementation is weak and breaches of the law are common, including:

A synthesis report by Forest Trends in 2006 concluded that, while virtually all timber harvested from natural forests is done under a licence, non-compliance with legal requirements meant “the majority of forestry operations cannot credibly be characterised as complying with national laws and regulations and are therefore ‘unlawful’”.[9]  A Chatham House study in 2014 came to the same conclusion.[10]

Conservation and sustainable use of natural resources is a National Goal enshrined in PNG’s Constitution and is a key responsibility of the PNG Forest Authority.[11]  However, PNG lost 9 million hectares of forest between 1972 and 2014, with unsustainable logging one of the main drivers of forest loss.[12]  A diagnostic mission conducted by the International Tropical Timber Organization in 2007 found that existing provincial and national level forestry plans were based on “guesstimates” rather than a sound forest inventory, and that “forest management in its traditional sense is not practiced in PNG at present”.[13]  The Forest Trends report also found that harvesting regulations designed to prevent over-logging are poorly enforced and implemented.[14]

In 2021, PNG’s Internal Revenue Commissioner announced that 20 logging companies are currently being audited by the tax office, with more expected to be added to the list. The announcement called the logging industry “one of the most delinquent sectors insofar as tax compliance is concerned” and indicated preliminary observations revealed “an entrenched level of tax evasion” and “egregious incidents of transfer pricing and under-declaration of income”.[15]

This follows on from research by the Oakland Institute in 2016 that found that most logging companies in PNG appear to declare little to no profit from the export of timber and generally do not pay the 30% income tax on profit required by national laws. The declared export price for PNG timber is significantly lower than other tropical wood exporting countries, and goods and services are often purchased from sister companies, creating a real opportunity for transfer mispricing. The report alleged that this tax evasion and financial misreporting in the sector had cost PNG more than US$100 million per year.[16]

PNG’s Special Agricultural and Business Lease (SABL) scheme was designed to facilitate large-scale agricultural development on customary land. The scheme gave customary landowners a lease over their land that they could then sublease to a developer for agriculture projects. Developers could then obtain a Forest Clearance Authority to clear forest land for palm oil or other crops. The scheme saw more than 12% of PNG’s total land area – more than 5 million hectares – pass out of the hands of customary owners and into the control of foreign developers, often the PNG-based subsidiaries of Malaysian logging and oil palm companies.[17]

Following widespread reports of abuses of the SABL scheme, in 2011, the Government of PNG appointed a Commission of Inquiry to investigate it. Two of the three Commissioners issued final reports in 2013, covering 42 SABLs (the third Commissioner never submitted a report). The Commissioners found that 38 of the 42 SABLs demonstrated a lack of landowner consent. They found numerous instances of landowner consent being fraudulently obtained through misrepresentation, resulting in SABL leases issued directly to foreign companies with landowners in the dark about the legal owners of their customary land.[18]  Despite commitments from the then Prime Minister of PNG to cancel the leases, logs are still being exported from SABLs.[19]

The 2013 SABL Commission of Inquiry described a range of allegations of corruption relating to logging and agriculture, implicating members of Parliament and government bureaucrats involved in the permit-granting process. It found evidence of corruption, mismanagement and lack of coordination in the departments of Lands and Physical Planning, Environment and Conservation, Agriculture and Livestock, Provincial Affairs and Local Level Government, Investment Promotion Authority, and the PNG Forest Authority.[20]

There have been widespread reports of local police forces (particularly the Royal PNG Constabulary) working with logging companies, including a practice of logging companies providing police with transport, accommodation and allowances in exchange for protection.[21]   Successive Police Commissioners ordered police to withdraw from logging sites in 2011, 2016 and 2017, but these efforts do not appear to have fixed the problem.[22]   Violent incidents involving police in logging camps were reported as recently as June 2021.[23]

Other social and human rights impacts

Logging and related palm oil development have also had social impacts, partly stemming from an influx of foreign workers or internal migrants from other areas and resulting social conflict, as well as tensions within communities around distribution of royalties and loss of natural resources. Other social problems linked to logging include the destruction of sacred sites, erosion of cultural and customary norms and associated cultural harms.[24]

There are reports of workers in logging camps engaging in gambling, prostitution and heavy alcohol and drug use, with increased movement of people and increased cashflow exacerbating these issues in previously remote communities.[25]    Logging has also been linked to increases in violence against women within communities, fuelled by broader social tensions, destablisation of pre-existing gender roles and increases in violence within the community overall.[26]  There have been numerous allegations of sexual abuse against women working in logging camps.[27]

There is also evidence that the SABL land rush has exacerbated existing land disputes. SABL boundaries, drawn as straight lines on a map, often do not conform with locally understood boundary areas. In several SABLs, the Provincial and National Lands Departments failed to undertake adequate consultation or prepare an accurate Lands Investigation Report, provoking or amplifying disputes among landowners and in some cases allowing a small group of landowners to take control over a large area of land.[28]

The logging industry has also been linked to forced labour and trafficking in persons. The US State Department’s most recent Trafficking in Persons Report alleged that Malaysian and Chinese logging companies had arranged for women from South East Asia and China to enter the country to be turned over to traffickers and transported to logging and mining camps, fisheries, and entertainment sites.[29]   The report also cited men from China, Malaysia and PNG being subjected to forced labour and debt bondage in logging camps.[30]