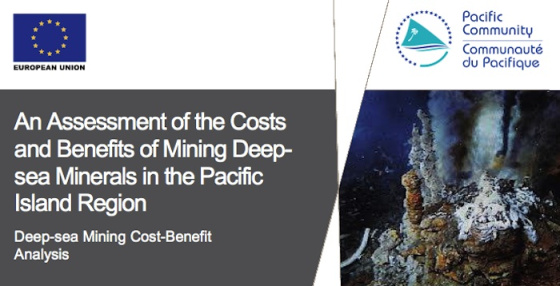 The European Union and SPC have published a new report [see below] claiming the money to be made from experimental seabed mining in PNG far outweighs the costs. Unfortunately the expensive report:

The Report has been written by Cardno, an Australian firm who also work for the Mining Industry, including Newcrest and Harmony Gold in PNG, and AusAID!

Good to see no potential conflicts of interest there!

Various scenarios for mining deep sea minerals in the waters of three Pacific Island countries are assessed in a cost benefit analysis report commissioned by the Pacific Community (SPC) and the European Union.

The report aims to assist Pacific Island countries with their decision making concerning deep sea minerals and provide information about the potential magnitude of the impacts of deep sea mining.

The assessment, conducted by Cardno between February and October 2015, offers decision-makers insights into the potential constraints and challenges to achieving positive net benefits if deep sea minerals mining were to occur under current circumstances.

It is part of the European Union-supported Deep Sea Minerals Project, implemented by SPC, aimed at improving the governance and management of the deep-sea minerals resources of 15 Pacific states.

Based on the resource potential of three countries, the analysis considers the monetary value of all aspects of mining Seafloor Massive Sulphides in Papua New Guinea; Manganese Nodules in Cook Islands; and Cobalt-rich Crusts in Republic of the Marshall Islands.

“This cost-benefit analysis was initiated in consultation with Pacific Island nations to provide a better understanding of the costs and benefits likely to be associated with deep sea mining,” SPC’s Deep Sea Minerals Project Manager, Akuila Tawake, said.

“It’s all about helping Pacific nations make informed decisions should they wish to engage in this new industry,” he said.

Notably, the report found that seafloor massive sulphide mining in Papua New Guinea has benefits that significantly outweigh the costs.

Also, it revealed that a mining scenario in the Cook Islands (where four metals are recovered and the miner owns the operation and the processing facility in a country other than Cook Islands) has the highest net benefits.

However, the report states that crust-mining in the Marshall Islands, under the two scenarios considered, is currently not economically viable due to present metal prices, expected ore recovery, and the cost of technology.

The report concludes that as long as proper steps are taken to manage the wealth in the long-term and to transfer the environmental risk from the people of the host country to the mining company, there is a higher possibility of the social benefits outweighing the social costs.

Despite the study’s limited focus on three countries, it provides important findings and considerations that are applicable to other Pacific nations with similar deep sea mineral resources, Mr Tawake said.