Papua New Guineans continue to demand the return of K780 million found to be stolen in the Finance Department Commission of Inquiry, which has again gone quiet. Now the National Provident Fund fraud issues have again come to life, with the present Prime Minister leading the country after a misappropriation charge and numerous others identified as involved in fraud and corruption.

It is 13 years since the National Provident Fund Commission of Inquiry reported its findings on the fraud and mismanagement in our national superannuation provider through the late 1990s. 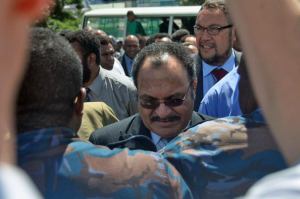 This means there is now a whole generation of young people  who know almost nothing about the corruption that defrauded over 50,000 ordinary people of their savings and which involved many of our current leaders and public figures, including the Prime Minister, Peter O'Neill.

To try and close this important gap in our collective memory and to remind us all of the Commission Findings and the lack of subsequent action against many of those implicated in the corrupt loans and fraudulent building projects, PNGExposed is embarking on a major exercise to republish the Commission findings.

The full report of the Commission of Inquiry has never been publicly released, but over the next few months we will republish the serialization of the Report findings that first appeared in the Post Courier newspaper in 2002.

We begin though with a short summary of the history of the National Provident Fund and the Commission's main findings (adapted from Wikapedia).

Tomorrow we will publish the Statement made by the Prime Minister Michael Somare when he tabled the Commission of Inquiry Report in Parliament. On Wednesday we will begin the republication of the Post Courier's serialization of the Commission findings.

The National Provident Fund (NPF) of Papua New Guinea was established in 1980.

In the late 1990s there was concern about NPF’s financial liabilities and several allegations of fraud and mis-management.

Between 1996 and 1997, the NPF had increased its debt by approving illegal loans from both domestic and foreign commercial banks as well as engaging in two fraudulent projects; the attempted purchase of the Waigani land and the construction of the NPF tower, which further contributed to its losses.

As a result, in early 2000, NPF fund managers announced a write down of 50 percent in all member contributions made before December 1999, equal to almost K114 million. But a special audit report revealed that the total losses were actually in excess of K155 million.

As a result of these findings the government established a Commission of Inquiry in April 2000 to examine the financial dealings and the allegations of fraud.

The Commission was chaired by former Judge, Tos Barnett, who had previously chaired the inquiry into the logging industry. Barnett was assisted by commissioners Donald Manoa and Lady Wilhemina Siaguru.

The Commission reported its findings in November 2002, but to date that report has never been made publicly available

The Commission of Inquiry found that in 1999 NPF Chairman, Jimmy Maladina had influenced the Fund to purchase a piece of land in Waigani, which he secretly held an interest in, at an exorbitantly inflated price.

Maladina had acquired the lease for the Waigani land in 1997, via his company Waim No.92 Pty Ltd, at a reduced price of PGK1.4 million, instead of the market value of PGK2.87 million. The Commission found that Maladina negotiated this reduction by bribing the chairman of the Lands Board, Ralph Guise, and the Lands Minister, Viviso Seravo.

Following his appointment as Chairman of the NPF in January 1999, Maladina with NPF’s Legal Advisor, Herman Leahy, arranged for NPF to purchase the rights to the Waigani Land, by purchasing a 100 percent shareholding in Waim No.92 for an inflated price of PGK10 million. Maladina had not declared that he held an interest in Waim No.92.

However, when news of the proposed acquisition was published in the national media, the ensuing outcry against the exorbitant price led Prime Minister Bill Skate, to force NPF’s withdrawal from the purchase. 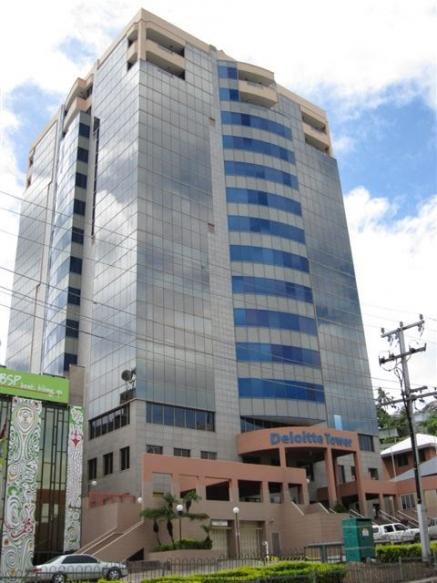 Kumagai Gumi was contracted by NPF to build what is now known as the Deloitte Tower in Port Morseby, in 1997. The project was beset by delays and overran its initial schedule, which when coupled with the devaluing of the Kina in 1998 and 1999, reduced the profitability of the project for Kumagai Gumi and led it to register a devaluation claim against NPF.

Maladina agreed with Kumagai general manager, Shuichi Taniguchi, that he would ensure that NPF pay out a K5.8 devaluation settlement provided that K2.5 million of this then be paid to Maladina, by way of commission. The monies were paid as agreed and the PGK2.5 million was shared between Maladina, O’Neill and Leahy.

The Deloitte Tower is now owned by NASFUND.

As a result of the Inquiry findings, Maladina was referred to the Commissioner of Police, but fled to Australia to avoid arrest. The government of PNG applied for the extradition of Maladina from Australia, but he returned to PNG voluntarily.

The Commission also referred then Treasurer Peter O’Neill to the Commissioner of Police for his involvement in both the NPF Tower fraud and the Waigani land case. O’Neill was brought before the Waigani Committal Court in 2005 and charged with misappropriation, but the charges were dropped.