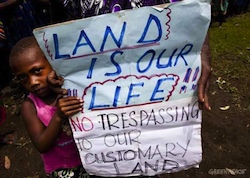 Lands Minister Benny Allan admits that the issue of the 99-year land leases has not been fully understood. He made the admission in Parliament yesterday when answering a question from Kairuku-Hiri MP Peter Isoaimo about colonial leases and what was being done about them.

"There's a lot of confusion with the leases," Allan said.

"A lot of our landowners assume that if the 99-year lease expires, the land returns back to the landowners. I want to put it straight that is not the case."

If a lease is given to a title holder for 99-years, and it expires, it still remains State land - which is now three percent of the land we have in the country."

"What happens happens is that if the 99-year lease expires, than it will be renewed, and the leasee will continue to lease from the Govenment for the next 99-years."

Allan said in the National Capital District, land owners were selling land, thinking that it was theirs when it was State-owned.

"There is a lot of land sold to other Papua New Guineans, settling on that land-that's illegal," he said