In December 2007, the National Executive Council (NEC) made a decision to develop a framework for the development of a long-term strategy for Papua New Guinea.

The result was "The Papua New Guinea Vision 2050", which was launched in November 2009.

Papua New Guinea's supreme court of justice has ruled that the Organic Law on Integrity of Political Parties and Candidates is unconstitutional. Please find attached the judgement in this matter...

We have watched you rise in stature as the nation’s vice regal, Governor-General, Head of State of Papua New Guinea on behalf of Her Majesty, Queen Elizabeth II.

You have presented yourself as a champion in the fight against corruption with consistent, consecutive leadership in word and through Transparency International (PNG) Inc annual Walk Against Corruption.

Papua New Guinea, Sir, is crying out for role models of righteousness in the light of much questionable decision-making by the elected government of the day.

A coalition involving Transparency International, business houses in Port Moresby who have supported the creation of a Business Against Corruption Alliance, civil society and PNG's peak legal professional body is calling on the Government to address a number of serious issues including:

I have heard and read about the current appointment of the Governor-General with interest and since it is a constitutional situation involving the representative of the Head of State it deserves extensive and thorough public discussion. It appears that there are some improprieties as a result of the conduct of the Parliament in the appointment of the G-G then it should be challenged in court.

On June 30th over 3,000 people peacefully marched through Madang town to protest the government's amendments to the Environment law that take away landowners rights and grant immunity to foreign companies for the environmental damage they cause. 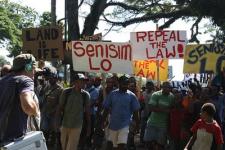 Although the government had negotiated a $180 million loan from the Chinese government to fund the building of the industrial park, that loan is in breach of PNG law. This is because under the loan agreement one particular Chinese company will get to build the park and 70% of the loan monies have to be spent on Chinese goods and services. This breaches PNG laws that require open and competitive bidding process that includes at least 3 companies.

The Prime Minister's arrogance and lack of respect for the law and proper process seems to know no boundaries.

IT SHOULD NOT be surprising that many Australians understand so little about Melanesian customary land.

They do not understand how land title not written down in a government register can be “secure”.

They do not understand how people can own land without being able to sell it.