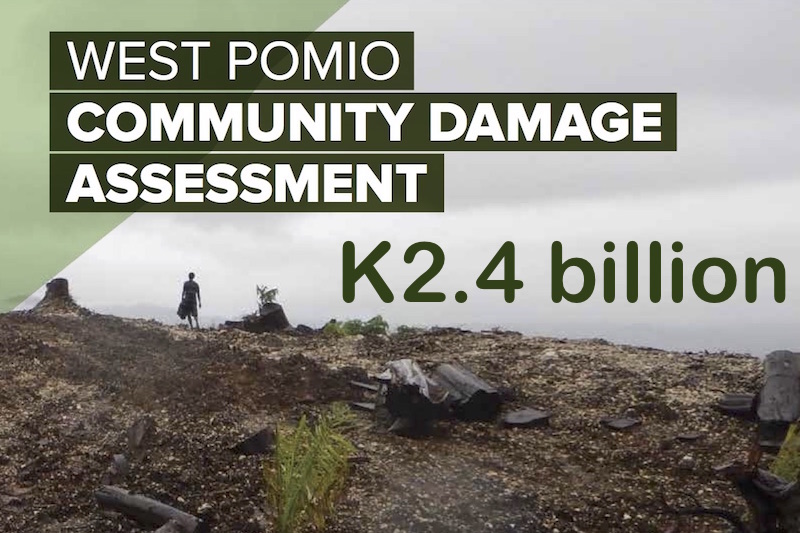 The damages assessment has been compiled by seventeen communities that have lost 42,400 hectares of customary land under the Pomata, Ralopal and Nakiura leases.

The total assessment of K2,402,362,483, comprises both the actual damage already suffered since the leases were issued and the future loss that will accrue through to 2110 if the leases are not cancelled and the land returned.

Community spokesperson, Ana Sipona, says the communities never agreed to the loss of their customary land or the logging and oil palm planting.

“There was never any proper awareness conducted by government departments and people did not give their free, prior and informed consent.”

“The SABL Commission of Inquiry revealed the same thing happened across the whole country, with more than 5 million hectares of land being illegally acquired.”

Spokesperson Norbert Pames says the size of the damages assessment is a powerful reminder of the value of customary land to local communities and the damage they can suffer when the State facilitates or encourages customary land alienation.

“Too often our leaders are fooled by false promises of the development and government services that will follow if they sign over our land and they do not stop to think about what will be lost in the process.”

Members of the communities compiled the damages assessment using a framework developed by Dr. Tim Anderson of the University of Sydney, published in 2017. The framework provides for an economic evaluation of the damage caused by activities that follow from the alienation of customary land.

“We have done a thorough assessment that includes the commercial loss of our timber and the rural production lost as a result of the logging and oil palm. This includes subsistence food production, lost market incomes and lost export crop sales,” says spokesperson Paul Palosualrea.

Spokesperson Mrs Leoba Lovatenra says the assessment of damage also includes the social values of customary land and forests and the loss of ecological goods and services.

“Before we lost our land we could provide support to our relatives in times of hardship, providing them with land to garden, housing materials and cash crops. Now all that is lost. There is also the loss of cultural and recreational values that are immeasurable but all have a value.”

“The ecological costs includes the impacts on soil and waterways and the costs that would be involved in restoring the 18,000 hectares of our forests that have been logged and cleared.”

The total damage is equivalent to K56,659 for each hectare of customary land affected.

Spokesperson and Mauna Ward Councilor, Pius Kene explains that while the logging company, a subsidiary of Rimbunan Hijau, has exported more than 1.25 million cubic metres of logs from the three SABL areas, the communities own successful certified sawmilling operation has been put out of business.

Rimbunan Hijau has received over K300 million from its sale of logs but the communities will have lost almost K292 million in revenue from their lost sawmilling business over the lifetime of the leases.

“The big differences between our own sawmilling business and the Rimbunan Hijau operation is that ours was owned by the communities themselves and used the forests in a sustainable way while RH is a foreign multinational and has cleared large-areas of forest for oil-palm planting,” says Pius Kene.

“It is a tragedy that the government has favoured foreign-owned destruction over sustainable locally-owned uses and left our communities to suffer the damage.”