Jubilee Australia released its report ‘Voices of Bougainville: Nikana Kangsi, Nikana Dong Damana (Our Land, Our Future)’ at a gathering of academics, representatives of non-government organisations and community members at the UNSW Australian Centre for Human Rights on Friday, September 12, 2014. 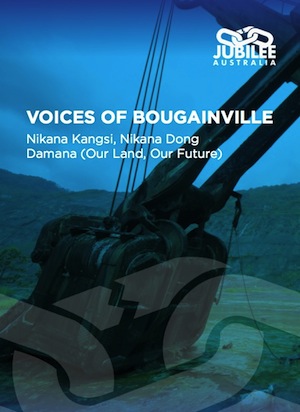 The report reflects the voices of people living in the vicinity of the Panguna Mine, regarding the proposed re-opening of the mine by Rio Tinto subsidiary Bougainville Copper Ltd. Closed in 1989 by local communities devastated by the damage it had caused their environment and social structures, the mine’s closure was followed by a brutal ten-year civil war during which more than 10,000 people were estimated to have died.

‘The people from the villages in the Panguna Region are those who have been most affected by the mine, and who will be most affected in the future should it reopen. It is vital that their insights be more deeply understood and considered by all of the parties involved,’ commented Brynnie Goodwill, CEO of Jubilee Australia.

Sixty-five people individually and one group of seventeen people, from villages in the vicinity of the mine, were interviewed regarding their feelings about the mine, the war that followed its closure, its potential re-opening and issues that still need addressing.

‘Huge number of abuses are still buried inside people’s hearts,’ said one villager from the Panguna region. (Report, p39).

People interviewed were also asked about how they saw development of their communities for the future. Concerns were raised that pressure to re-open the mine from the Australian and Papua New Guinea Governments, with the Autonomous Bougainville Government, have been linked to the long-sought after independence of Bougainville.

An almost unanimous view from those interviewed was that they did not want the re-opening of the mine to be linked to independence of Bougainville, but rather independence to occur first, and for Bougainvilleans to then determine their options for going forward. The report documented significant concerns about land being held for future generations, and an interest in exploring alternatives to large-scale mining to support an independent Bougainville.

‘We do not want the same thing to happen again,’ said one member of the Bougainvillean community attending the event, with regard to the potential re-opening of the mine.