There Is No Room For Coal In The Pacific 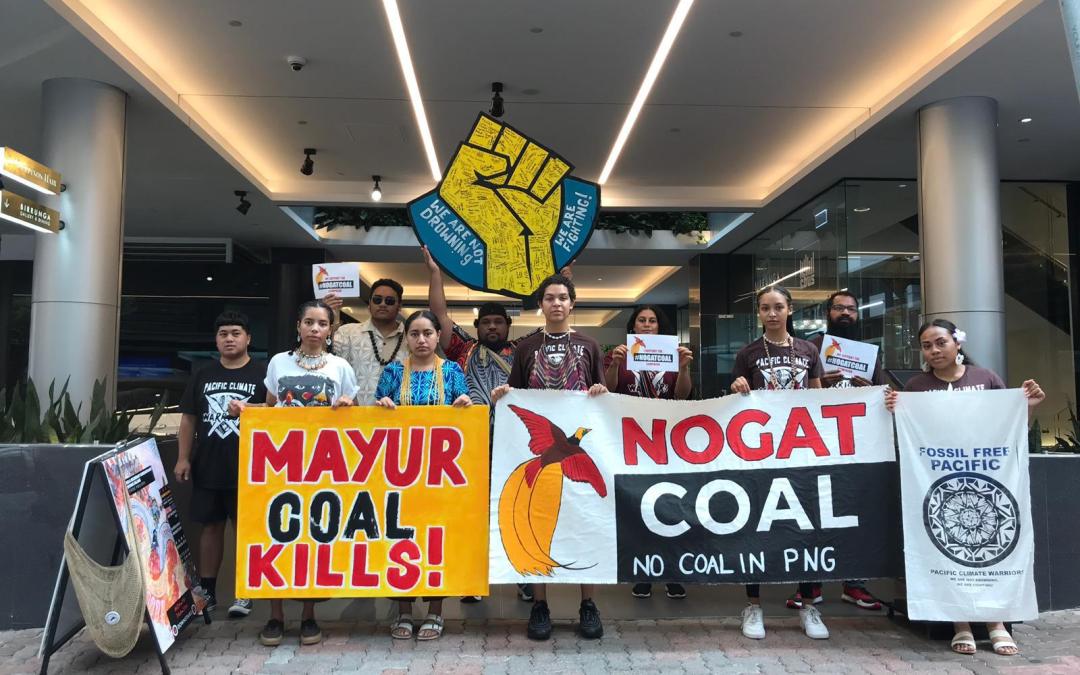 Today, The Pacific Climate Warriors in conjunction with the Nogat Coal Campaign, organised a protest at the AGM of Australian energy company Mayur Resources. The ASX-listed company is planning to develop a coal industry in Papua New Guinea (PNG) – including a coal-fired power station on the doorstep of Lae, the country’s second largest city. If Mayur’s plan succeeds, PNG would be the first Pacific country with a coal industry.

Mayur’s agenda defies all logic of science and economics in a world that is suffering accelerating climate change and a global economy that is seeing almost daily declarations of bankruptcy from the coal industry. PNG does not need coal-fired power. It is more expensive and more polluting than the many renewable energy sources – hydro, solar and biomass – that we already have an abundance of here.

It is also clear to us that this is yet another example of an Australian company pushing for a project without proper consultation and consent from the local PNG communities, as we saw with Rio Tinto’s Panguna mine in the 1970s and BHP’s Ok Tedi mine in the 1980s. We have seen again more recently with Juukan Gorge in Western Australia that these problems just keep occurring. As with these  examples, Mayur Resources do not have a social license to operate, especially when it comes its planned coal-fired power plant in Lae.

We believe that it is vital to stand in solidarity with the Nogat Coal campaign and the local communities that oppose Mayur Resources’ coal projects. There is also a worldwide movement to fight against climate injustice as we speak – an injustice for which the mining and burning of coal is a leading cause. As Pacific Islanders living in Brisbane we know that we are not on the frontlines of the climate crisis, but we are on the frontlines of climate action. As the seas and temperatures are rising – so are we.

With our peaceful protest, we want to amplify the voices of and stand together with the local communities in PNG. For their right to Free, Prior and Informed Consent – and for our survival.

It has been twelve years since Australia built a new coal-fired power station in our own country. This is because renewables are cheaper and come without either the carbon pollution of the other health and environmental impacts that coal causes. If we are no longer building coal plants here, why would we start building them in PNG?

The project also does not stack up from an economic perspective. The global coal industry is declining sharply as financers and insurers around the world are backing away from it and turning towards renewables. We have serious questions about the economic viability of Mayur’s coal-fired power station , and we believe that there is a high risk that it could lock the company’s shareholders into stranded assets and Papua New Guineans into more expensive and dirty power for 25 years.