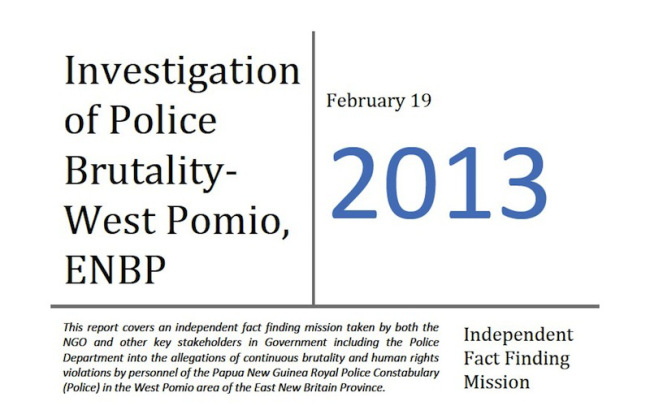 Instances of violence by the police include brutal assaults with tree branches, rendering the victims unconscious, locking villagers in shipping containers for days on end, attacks by police on unarmed villagers with fan belts, rifle butts and toe-capped boots, forcing villagers to spend the night lying in the rain on felled logs and forcing them to drink polluted water.

The police were also found to have forced various groups of youths and landowners to sign agreements pledging not to resist logging operations on their land even though the people had not consented to the logging and it was being done in breach of their constitutional rights. The police also forced various people to make compensation payments in cash to the logging company.

In all the mission team interviewed more than 30 victims of police abuse and concluded:

‘the force used by the policemen in dealing with ordinary villagers, as alleged was grossly excessive, unwarranted and amounts to a criminal intent to do grievous bodily harm’. It was also in breach of constitutional rights and was ‘inhuman and amounts to a breach of their human rights’.

The fact finding mission say the police were operating at the instigation of Malaysian logging company Rimbunan Hijau, the largest logging company operating in PNG and a serial offender when it comes to using police to abuse local communities.

The Independent Mission found the ‘policemen were flown into the area and were being deployed in the hire and care of the logging company, Gilford Ltd and were accommodated at the Drina Logging Camp’.

The Independent Mission report was completed in February 2013 but has not been publicly released.

The Mission was set up to investigate allegations of continuous police brutality and human rights abuses by police operating in the Ralopal and Pomat SABL lease areas where landowners are contesting the legality of the leases and Rimbunan Hijau’s logging operations.

The Mission found the police were hired by Rimbunan Hijau subsidiary Gilford Limited with the intention of preventing the landowners from protesting against the operations of the company.

The police intimidated, harassed and physically assaulted local landowners who were trying to execs their constitutional rights to peacefully protest and protect their land.

A recent Commission of Inquiry into SABL leases in Papua New Guinea has labelled the leases, which cover more than 5 million hectares of land in total, unlawful. The Commission found widespread abuses in the development of the leases, a failure to follow the process and requirements in the Lands Act and a failure to secure the informed consent of local people.

The Commission findings have been accepted by the Prime Minister and endorsed by the National Executive Council which has ordered many of the leases be revoked. As yet that executive order has not been implemented.