We are all used to reading logging industry propaganda in The National, after all it is owned by Malaysian logging giant and infamous human rights abuser, Rimbunan Hijau. But now the Post Courier has found itself caught up peddling forestry industry misinformation.

Contrary to the claims in the Post Courier story below (a story The National first published a day earlier), Japanese aid agency JICA has not said forest management in PNG is carried out in an ecologically sustainable manner and there has been no significant deforestation over the past twenty five years. Neither has it said there is no illegal logging

The whole Post Courier story is just misinformation peddled by the Forest Industry Association and its notorious hack, Bob Tate, based on their interpretation of PNG's new forest inventory.

That inventory is based around an analysis of satellite imagery that shows 80% of PNG can be divided up into one hectare blocks with at least 10% canopy cover and tress at least three metros tall. These areas include logged over forests, rural gardens, villages and oil palm and coconut plantations. 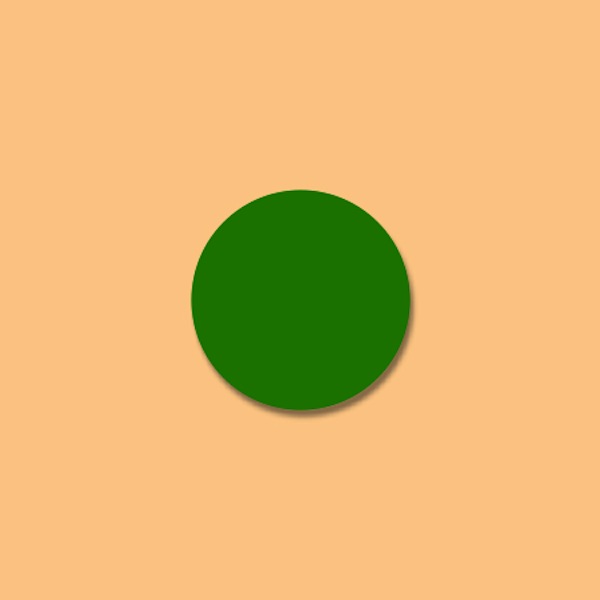 Clearly,  logged over forests, gardens, rural villages and oil palm and coconut plantations are all areas that although officially defined as forest in the inventory, have no significance at all in defining ecologically sustainable forest management or deforestation rates and in no way can they be taken as an endorsement that logging is legal! 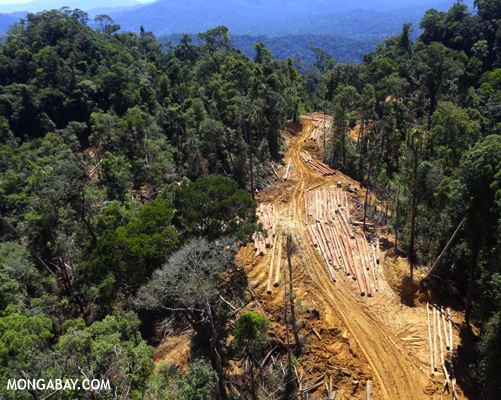 According to the FIA logged over forests like these are being sustainably managed despite having all commercially valuable timber stripped out. 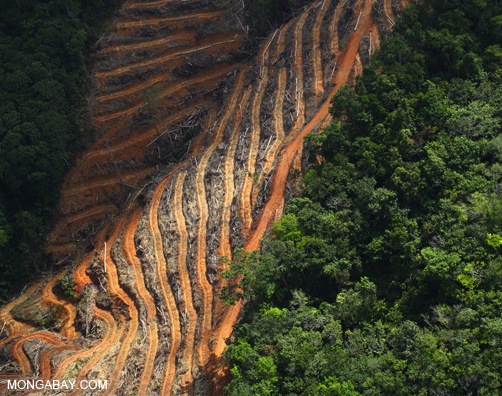 According to the FIA areas of oil palm planting like this are still counted as forest and should not be counted as deforested, 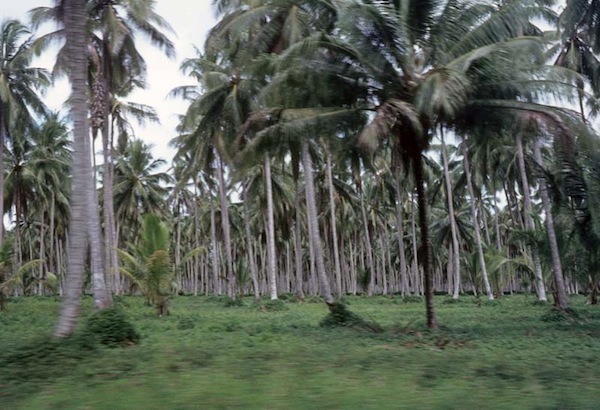 According to the FIA coconut plantations like these are 'healthy forests'

Forest in Papua New Guinea is in a robust state, without any significant deforestation for the past 25 years, PNG Forest Industry Association executive director Bob Tate has announced. In a media statement yesterday, Mr Tate said the information has been confirmed through the ground-breaking analysis using satellite sensing by Japan International Cooperation Agency (JICA) reports.

"The results of this work have been recognised by the United Nations Food and Agriculture Organisation in their latest Forest Resource Assessment released last month," he said

. Mr Tate said this was the first full inventory ever undertaken of PNG’s forest estate, and it was also a good news story for the PNG Government, which is hosting a meeting of APEC Forestry Ministers this week in Papua New Guinea. He said the PNG Forest Industry Association thanks JICA for the important research.

"This data is the foundation we need to move to the next step and implement sustainable forest management in PNG," Mr Tate said. "This system of management meant tracts of forest and species dependent are preserved and harvesting is selective to ensure regrowth." He said that the latest research findings indicated that sustainable forest management is being practiced in PNG, and has been demonstrated to be successful; concerns about deforestation have been largely exaggerated. "To formalise this sustainable approach, PNG’s forest industry appeals to other donors to fund development of world’s best practices forest sustainability standard, akin to those in developed economies. "The JICA research reveals Greenpeace has calculated misinformation and Greenpeace has since closed down in PNG." He added that Greenpeace and other forestry activities wrongly asserted repeatedly that 70 per cent of PNG’s timber was illegally logged.

More than 80 per cent of the country is still covered by forest, according to a recent study by an aid agency, dispelling claims by anti-logging activists. Using satellite sensing, the Japan International Corporation Agency (JICA) reported that there had been no significant deforestation in PNG over the last 25 years and that the forests were in good health. The agency’s analysis was endorsed by the United Nations’ Food and Agriculture Organisation.

“This is a good news for the PNG government who are hosting a meeting of the APEC forest ministers in the country this week,” Bob Tate, executive director of the PNG Forest Industry Association says.

Thanking JICA for the research, Tate said this was the first full inventory ever undertaken of the country’s forest estates.

“This data is the foundation we need to move on to the next step to implement sustainable forest management in the country,” he said.

Tate said this system would preserve tracts of forest and species dependent on them as well as ensure selective harvesting.

“These principles guide PNG government policy today, but a national standard for sustainable development is needed. “This latest research finding indicates that sustainable forest management has been practised and has demonstrated to be successful but concerns about deforestation have largely been exaggerated”.

“The only source of this number is an unverifiable claim by the World Wildlife Fund (WWF),” he said. “No timber was allowed to be exported without being checked by independent inspectors but yet the anti-forestry activists and the World Bank continue to cite the number.”

Tate believes the APEC forest ministers will focus on ways to improve forest management and how forestry could be used to reduce greenhouse emissions. He said now that the country’s comprehensive forestry inventory was in place through JICA’s analysis, he expects the European Union will fund further research on the carbon cycle in the PNG’s forest species.