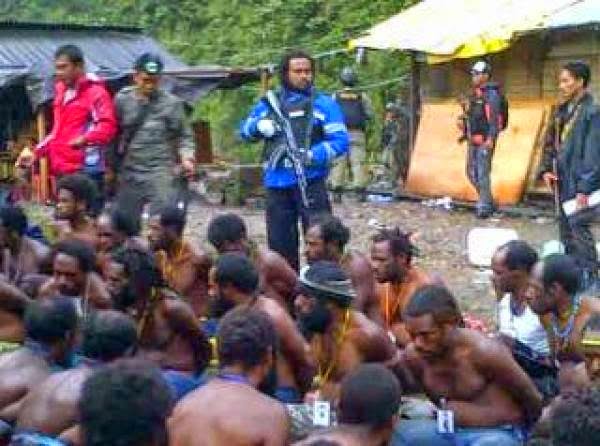 West Papua was colonised by the Netherlands in 1898, along with the islands that now make up Indonesia. When the Republic of Indonesia became an independent nation state in 1949, West Papua remained under Dutch control. The Dutch government began preparing West Papua for its own independence throughout the 1950s. At the end of 1961, West Papua held a Congress at which its people declared independence, and raised their new flag – the Morning Star.

But within months the dream was dead. The Indonesian military invaded West Papua and conflict broke out between the Netherlands, Indonesia and the indigenous population regarding control of the territory. The US intervened and engineered an agreement between Indonesia and the Netherlands, which in 1962 gave control of West Papua to the United Nations and one year later transferred control to Indonesia. The Papuans were never consulted. However, the agreement did promise them their right to self determination – a right which is guaranteed by the UN to all people in the world.

Since then, the people of West Papua have been subjected to the most horrific acts of brutality, suppressed and oppressed, tortured and maimed and killed. It is estimated that more then 700,000 people have been killed so far.

The killings continue unabated. The UN and the West continue to ignore the situation for economic convenience.

The people of West Papua are a Melanesian people, a Pacific people, the Pacific cannot be said to be free as long as West Papuans are unlawfully imprisoned on their own land.

It is absolutely necessary as human beings, to fight against the inhumane treatment of humans everywhere. It is absolutely necessary for Pacific Islanders and Melanesians and indeed Papua New Guineans, to sign this petition and bring the situation of West Papua to the attention of the United Nations Secretary General and the General Assembly and the United Nations Security Council so that this issue is addressed and the people of West Papua can be free to determine their own affairs and realize their dreams