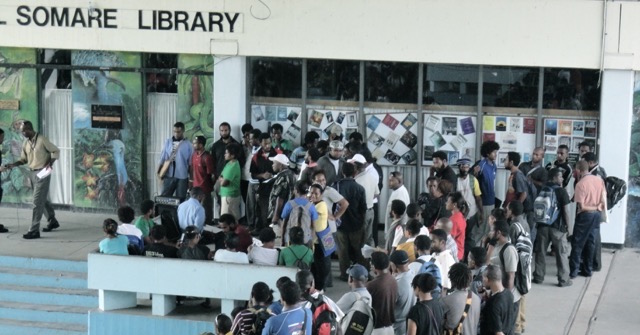 Noted commentator Martyn Namorong shares his ideas on why and how we need to reform our education system in order to fulfil our dream of being an independent and prosperous nation.

"I believe we are a species with amnesia. I think we have forgotten our roots and our origins. I think we are quite lost in many ways."

What I am going to write below is nothing new. The discussion of decolonizing education in PNG is older than the nation of Papua New Guinea itself. By nation I mean the Bird of Paradise that hatched from its egg on the 16th of September 1975.

When PNG gained its “independence” from Australia in 1975, the process of decolonization in the legal and political sense was complete. Or so we thought. Papua New Guineans though continued to debate the notion of independence over the coming decades as it has become apparent that our independence is not as complete as we thought.

One way “independence” for PNG can be described is like getting a loan to start a business and opening up a shop in a property owned by foreigners. It is a facade that you “own and operate” a business when in fact you work for the banks and your landlord but are given an “owners” tag by the Investment Promotion Authority.

Whilst this may seem like how things have turned out, it was not how things were envisaged by those who worked hard towards decolonizing Papua New Guinea. Their thinking is captured by the Constitution in PNG’s Five National Goals and Directive Principles.

Below is a direct quote from the Constitution declaring this goal:

“We declare our first goal to be for every person to be dynamically involved in the process of freeing himself or herself from every form of domination or oppression so that each man or woman will have the opportunity to develop as a whole person in relationship with others.”

This my fellow Papua New Guineans is what decolonizing education is about.

You have to put yourself into the shoes of the writers of the Constitution. Father John Momis (as he was then) was a Catholic Priest who also chaired the Constitution Planning Committee along with Chief Minister Michael Somare.

Sir Michael and President Momis were Melanesian Christians articulating liberation of their people from the chains of colonization. And just as Christ the Redeemer frees his people from the bondage of sin, so should education in Papua New Guinea liberate all citizens from various chains of this secular world.

Decolonizing education in PNG therefore must be about decolonizing the human mind. It is a form of education that liberates all Papua New Guineans from various social, political and economic structures that keep them enslaved.

The education system we have inherited from our colonial masters is modeled on the western Industrial Revolution. The Factory Owner (Government) instructs all its supervisors (Teachers) in the assembly line (Prep to University) to make products (graduates/workforce) that add shareholder value (pay taxes). If you don’t believe me go to the budget booklets and look at who is the biggest contributor to national government revenue in PNG. Yes, it Is the PNG workforce through their wages and salaries taxes.

The founders of this nation knew about the flaws of the western model of development. That is why they wanted the process of education as described in the first National Goal and Directive principle to be a process of liberating one’s self from all forms of oppression.

The greatest national tragedy is that whilst the writers of the Constitution knew very well how the western model of development would enslave Papua New Guineans, they made the National Goals and Directive Principles non-justiceable. Section 25 (1) of the Constitution makes these goals impotent because they are not enforceable in court. In some sense PNG’s Constitution is an oxymoron piece of work because whilst it declares independence in the Preamble, it enslaves the nation in section 25(1).

“...we are a species with amnesia”

Our education system should remind us of who we were before the outside world told us who we are. Because if we don’t, we shall always be oppressed people like fish in a tank of water never realizing how entrapped we are by the social and psychological constructs of the outside world. How can a fish think of a world outside of its tank? Are you really sure that you are able to “think outside the box”?

Education in its true sense should help you understand what you already knew. In other words, it should empower you instead of leading you like a cow to the slaughter house. Thus to decolonize education is to decolonize the mind and liberate the our people from mental slavery.