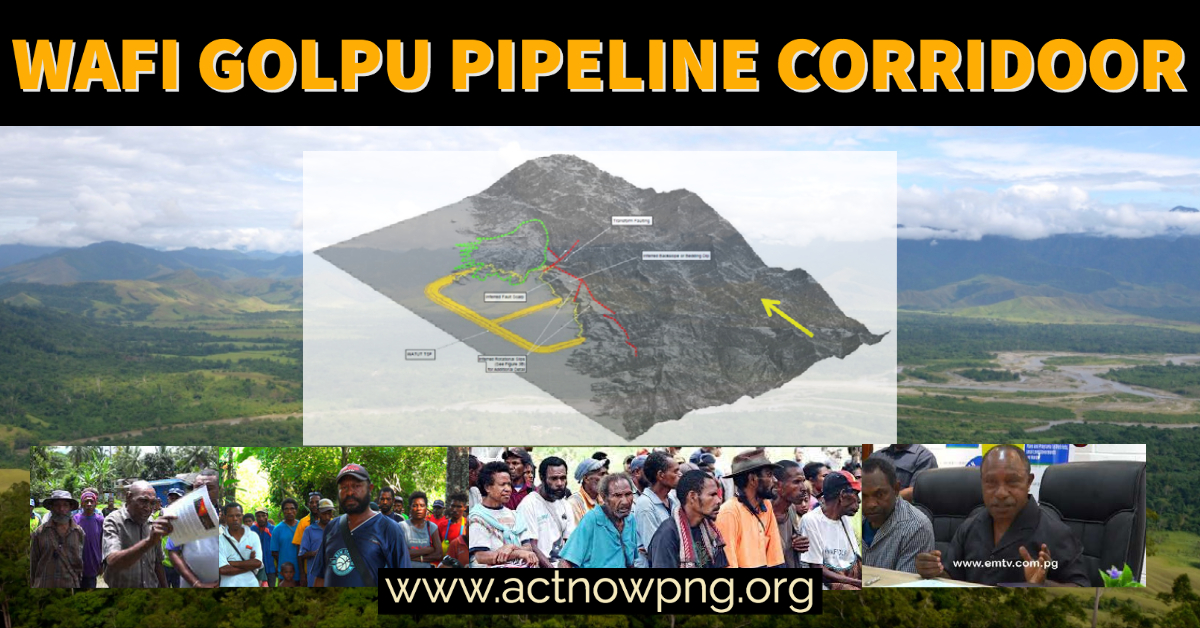 The Wafi-Golpu Pipeline corridor will run from the mine site in the mountains of Wampar Local Level Government (LLG) area right through to Lae City and then onto the coastline of Wagang village in Ahi LLG area and finally into the sea of the Huon Gulf. Along the way this pipeline will run through mostly customary lands of the peoples of Wampar and Ahi LLG areas, and only a small portion will run on state land.

Two pieces of legislations on customary land were passed in 2009 and enacted in 2012. These were the Customary Land Group Incorporation Act 2009 and Customary Land Registration Act 2009. These two piece of legislations supersede all other relevant laws that existed prior to their existence, and anything to do with customary lands in this country are now subservient to these two laws.

However, there is now a dubious landowner association called the Wampar Pipeline Landowners Association set up by people who have no customary lands on which the pipeline will traverse. This group is ably backed by the former member for Huon Gulf, Ross Seymour, and the Wampar Local Level Government. Village councilors, who are complete outsiders, are even included in this dubious landowner association to benefit fraudulently from other peoples’ land.

The Wafi-Golpu team has been informing customary landowners that as soon as they are paid for damages to their property, they will not be paid ever again for the use of their customary lands as long as Wafi-Golpu mine exists. A one-off payment will be done and that’s it, and people’s customary land will be gone for eternity.

However, the Wafi-Golpu team has been deceiving customary landowners. They are trying to take advantage of the ignorance and stupidity of customary landowners, assuming they will fall for the fraudulent tactics that the company has laid out in advance to grab their customary lands without paying due compensation using appropriate land laws of this sovereign nation.

It is peoples whose customary lands, which are going to be used for the Wafi-Golpu pipeline, that have every right to form a pipeline landowners’ association to fight for their rights.

Besides that, any association that is of dubious nature should not be entertained by the Wafi-Golpu mine or any other relevant state entity. These fraudsters are attempting to abuse the concept of Associations or the law that governs incorporation of Associations to swindle off other peoples’ customary lands to financially benefit themselves.

In regards to Customary Land Group Incorporation Act 2009 and Customary Land Registration Act 2009, these two pieces of legislations recognize clans as the lowest social unit to which customary lands can be owned and managed. So the use of some dubious association, such as the Wampar Pipeline Landowners Association, to become a recognized organization to speak on behalf of customary landowners of lands along the Wafi-Golpu Pipeline corridor is absurd. Associations do not and cannot own customary lands. Period.