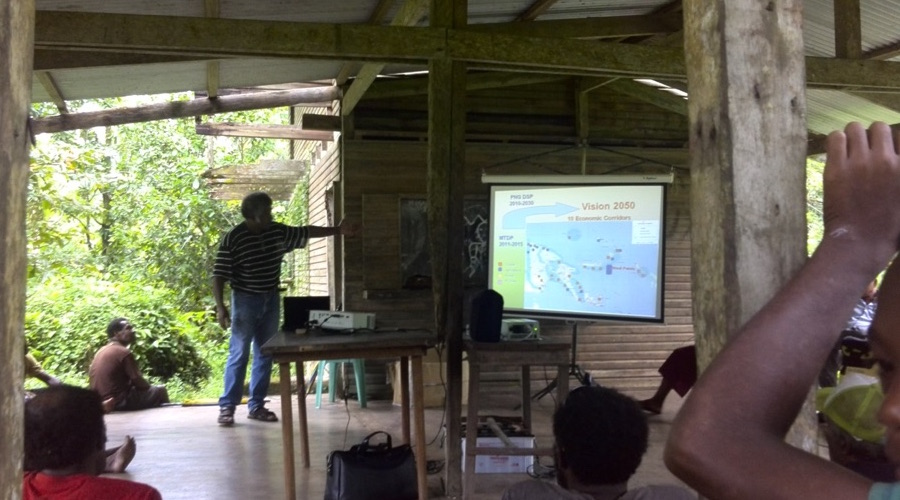 PNG’s largest logging company and multi-sector business group is telling rural communities that human rights and sustainable business principles impede rural development and should be ignored if people want to get rich.

This is the message Rimbunan Hijau and its consultant Kanawi Pouru, have been delivering to people in the Pomio District of East New Britain Province who are questioning the company’s logging and oil palm operations. Kanawi Pouru is the Former Managing Director of the PNG Forestry Authority.

Speaking to local people at the Talo Club in Malakur Village last month, Kanawi told them the United Nation’s Declaration on Human Rights and the Round Table on Sustainable Palm Oil (RSPO) Principles and Criteria are anti-development mechanisms setup by rich and wealthy Europeans to suppress people in rural communities in Papua New Guinea who want to change their life style and alleviate poverty through commercial exploitation of their vast natural resources.

Kanawi and Mok, a representative of RH subsidiary Gilford Ltd, bluntly told people at Malakur Village that unless they allowed their land to be converted into oil palm plantations they will remain in poverty. Kanawi also accused NGOs of misleading “ignorant rural communities” and suppressing their rights to advance economically.

This didn't stop the villagers complaining about the manner in which Gilford and the umbrella land owner company, Memalo Holdings Ltd, were being secretive about a lot of information in relation to the controversial SABL on their land and pointing out the safe guards under the UN Declaration and the RSPO.

Mr. Mok told the people that it was not their place to ask such questions about whether Gilford complied with RSPO and UN standards.

“We have the answers but we will not give them to you in this meeting because you are not the right person to ask us these questions.” said Mr Mok.

Mr. Pouru and Mr. Mok were also asked questions about why there was no transparent process in seeking the free prior and informed consent of landholders before deciding what type of activities were to be introduced on their land and if the company was a member of the RSPO and if not, did they intend to seek membership.

They also asked whether RH was aware that under the UN Declaration on the Rights of Indigenous Peoples the landholders were entitled to be informed of the positive and negative impacts of the project and that they had to seek their prior informed consent before doing anything on their customary land. The landholders pointed out that they should have the choice to withhold their consent.

“Do you want to abide by those rules or do you want to allow the developer access to your land and change your lives? These Declarations and the RSPO are rules set up by Europeans who have destroyed their own resources and want you to be careful with yours. They do not want you to be rich like them so they created these rules to stop you from engaging companies who are willing to invest their own money to help you.”

Kanawi further stated that the land was already leased to the government and subleased to RH so the landowners only have to demarcate clan boundaries for the purpose of distribution of rentals and any discussion about the choices or other options is not the landowners call.

He said the company has already planted more than 11,000 hectares of oil palm and was in the process of building a mill that would be commissioned that month.  If they did not allow any work to start on their land they would only be suppressing themselves from benefiting from the changes that are being experienced by people in the three other concessions who have already given RH access.

* The 'SABL Story Project' is an initiative of ACT NOW! that gives a voice to people in remote rural areas whose lives are impacted by the SABL land grab but who do not have access to the media to tell their stories.