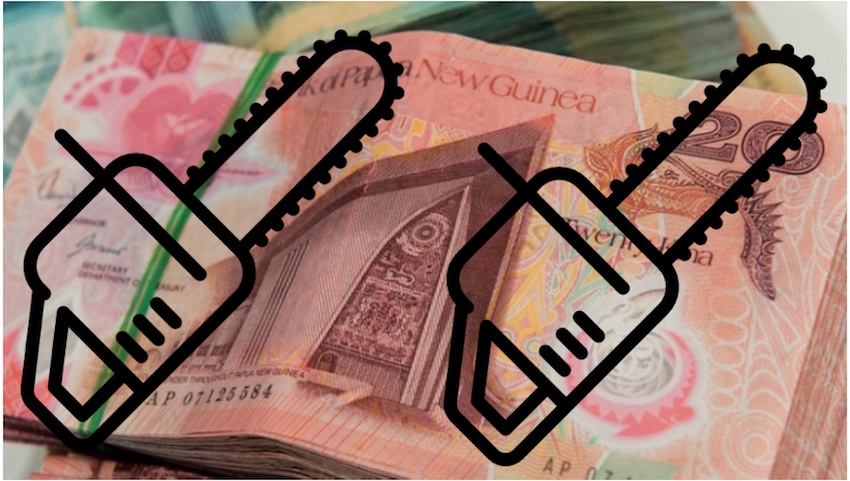 Illegal logging in Papua New Guinea represents a major money laundering threat as it generates very large illegal profits and it has a very high detrimental impact on the economy as well as the natural environment.

This is according to a money laundering and financing of terrorism risk assessment published by the Bank of Papua New Guinea in 2017.

The risk assessment says the strong indicators of large scale corruption and illegal logging in the forestry sector in PNG are well known, well documented and widely accepted. It says those risks have already led one commercial bank to ‘institute a policy of not dealing with companies involved in the logging industry’.

The PNG Forest Authority though remains apparently unconvinced, believing ‘the extent of illegal logging is seriously overstated’. This is despite the risk assessment finding the PNGFA’s own records showing ‘extensive over logging’ which delivers ‘additional profits’ to the logging companies.

Because of the PNGFA’s intransigence, the risk assessment says there has never been any investigation into breaches of forestry laws that has resulted in a successful prosecution of a timber operator or an individual associated with the industry. This is despite many reports of high levels of corruption in the sector and concerns that have been voiced over a long period. The PNGFA’s approach is ‘counterproductive’ says the assessment, ‘as it provides little disincentive for unauthorised activities’.

The risk assessment says the scale of illegal logging in PNG not only dramatically reduces the financial benefits of the industry to the country but is also diminishing a limited natural resource. The loss of forest areas is ‘a major problem’ as almost a third of all logging involves land clearances for agriculture leading to permanent deforestation. This is increasing the loss of wildlife habitats and increases the risk of loss of endangered species, says the assessment.

In 2013, the UN Office on Drugs and Crime estimated that that the value of illegal logging in PNG and the Solomon Islands was in the order of $800 million per annum, this, says the assessment is double the value of legally exported forest products reported to the Bank of PNG. It is also equivalent to around 10% of the value of all legitimate exports from PNG and represents about 4% of national GDP. In addition, the lost benefit to income tax revenue, GST and licence fees is ‘very significant’.

In addition to the illegal profits for logging companies and financial losses to the country, the assessment also notes the forestry industry is linked to a range of other criminal activity. It says the network of forty private logging ports around the country are outside effective Customs control and are known to be used for criminal activity including people smuggling, the export of flora and fauna and money laundering.

It is also ‘considered likely’ that that there is a significant level of prostitution associated with forestry camps and cases where foreign women engaged in prostitution have been brought in involuntarily or under duress are also ‘likely’.

The laundering of the proceeds from illegal logging is not just a domestic problem. The assessment says that most of the laundering of funds derived from illegal logging in PNG probably happens offshore, although some of the money does find its way back to PNG to support the continuation of logging activities. This means that some foreign countries are facing a domestic money laundering problem created by criminal offences committed within PNG. While addressing the problem at its source (in PNG) is described as ‘critical’, there is also the opportunity for PNG to work with other countries to trace, locate, freeze and recover criminal proceeds overseas.

The risk assessment says that illegal logging is a complex problem that requires ‘coordinated and concerted action by PNGFA, revenue agencies and the Office of the Public Prosecutor’ and ‘a different approach to compliance, involving criminal prosecutions and imprisonment, as provided for in the legislation’.

The assessment says although there are capacity and skills shortages within government agencies and weaknesses in the regulatory and legislative framework, most importantly, there is currently a lack of will in the PNG Forest Authority to investigate and prosecute illegal logging.

The assessment also calls for a joint task force to be created with FASU, Customs, PNGFA, police, Internal Revenue Commission and Department of Justice to trace, locate, freeze and recover the criminal proceeds of illegal logging, including those banked overseas. It also notes that technical assistance being provided by INTERPOL to address the illegal logging and money laundering is an important development.

The assessment says the joint task force should conduct ‘a specific money laundering risk analysis for the logging industry’ that will ‘address criminal activity in the industry’ and  ‘provide the basis to reduce criminal behaviour [and] increase public confidence in the integrity of the industry’.

The findings of the risk assessment should serve as a warning to all the commercial banks in PNG of the potential risks they could face from doing business with the logging industry and providing financial services to the sector.