IRC yet to confirm logging taxes in PNG 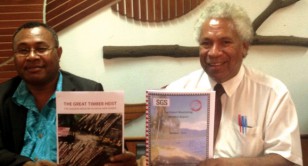 Minister for Forest, Douglas Tomuriesa and Goodwill Amos with the Oakland Report during a press conference.

THE Internal Revenue Commission is yet to confirm whether many foreign logging companies are in the country are avoiding to pay taxes in Papua New Guinea.

In a report "The Great Timber Heist: The Logging Industry in Papua New" released by US-based think-tank Oakland Institute, it was suggested that by declaring little or no profit, logging companies are avoiding paying taxes and highlighted discrepancies in timber export prices.

"The report’s findings call for the relevant authorities such as PNG’s Internal Revenue Commission, the agency in charge of collecting taxes and enforcing tax regulations, to take legal action urgently to defend the interests and rights of PNG citizens."

The IRC when contacted yesterday said it would make a statement soon after studying the report. Forest Minister Douglas Tomuriesa had earlier disputed the report, saying it tarnished the good work carried out by forests.

Meanwhile, Rimbinan Hijau Group, the largest logging company in PNG, which was mentioned in the report along with some of its 16 subsidiaries, has denied statements made against them.

Some of the statements that were cited in the report include:

Mr Wilhelm said the report wrongly claimed Rimbunan Hijau’s timber prices were lower than others and on the basis of that claims there is tax fraud.

"It is meaningless to compare prices for a mixed shipment from PNG, which might average $US200 per cubic metre when a shipment made entirely of teak from another country might sell for anything up to $US1000 per cubic metre.

"Oakland Institute did not contact Rimbunan Hijau or the PNG Forest Industries Association on the content of this report before it published it," he said.