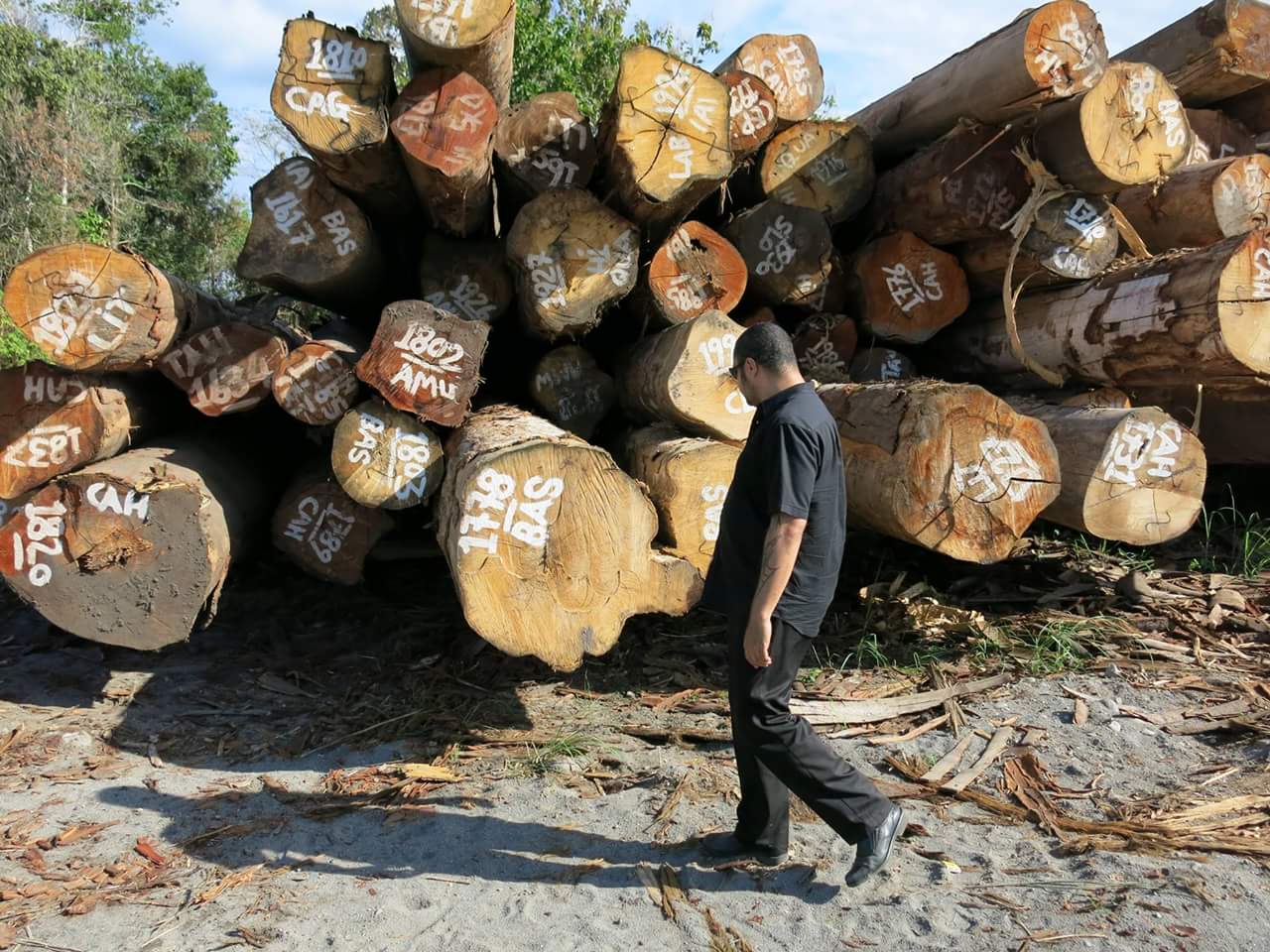 Papua New Guinea’s forests are under attack, and the international community must join forces to fight the illegal loggers destroying one of the world’s largest rainforests. This was the message from Papua New Guinean politician Gary Juffa at the COP26 climate summit in Glasgow, Scotland.

“The world must win the fight against these bioterrorists. We must pursue with armies those who threaten the very existence of our world,” Juffa, the governor of Oro province, said at the conference last month. “If we continue to allow timber cartels to control nations, how effective will the climate agreements made at COP26 be?”

These “timber cartels” began targeting PNG’s forests in the 1980s, promising development to the materially poor local landowners in exchange for access to their forests, kicking out legitimate timber companies in the process. Land rights were signed away and the local people watched their forests disappear while the promised roads, churches and wealth failed to materialize.

“They don’t pay their taxes, so they’ve got a lot of money available to bribe and corrupt,” Juffa told Mongabay. He said he learned about the extent of the corruption while working in PNG’s customs service, where he rose through the ranks to become commissioner before resigning in 2011. He won a seat in parliament as Oro province’s governor in 2012, calling to “take back PNG,” and was reelected in 2017. 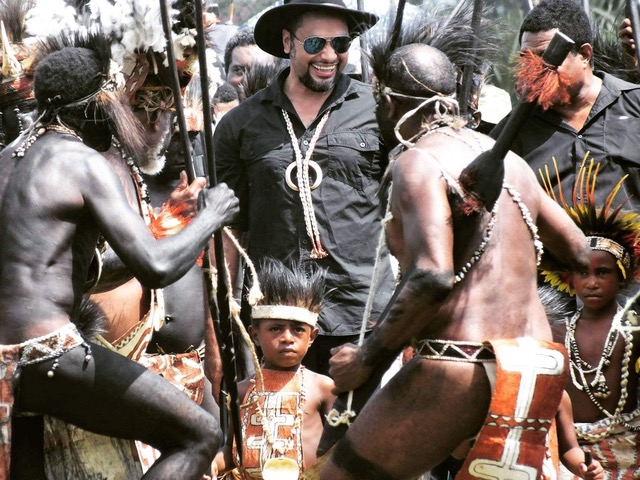 Gary Juffa (center), governor of Papua New Guinea’s Oro province, has emerged as one of the country’s most outspoken opponents of illegal loggers. Image courtesy of Gary Juffa.

Juffa said this political corruption has forced him to use the court system to chase out three of the five timber companies operating in Oro province. Rather than finding support in parliament for policies that would protect the forests, he said some parliamentarians work for the loggers themselves. “The government systems have been so compromised and so perverted and corrupted that they work against me and against what we’re trying to do, which is right by our people and by the environment,” he said.

“That’s the same case in many parts of the developing nation landscape. If you go to a developing nation, you’ll find that government machinery have been hired. They’ve become mercenaries themselves, and they are paid for by giant cartels, companies, transnational organizations who utilize these government services for their own benefit, and it’s usually to the detriment of the interests of the people of that nation and the future of that nation.”

The island of New Guinea, which PNG shares with Indonesia, is home to the world’s third-largest expanse of tropical rainforest, and despite accounting for less than 1% of the world’s landmass, holds 7% of global biodiversity. In 2014, PNG became the world’s largest tropical timber exporter, shipping out 3.8 million cubic meters (134 million cubic feet) of timber. A 2008 study showed that 24% of the country’s forests had been destroyed or degraded by logging between 1972 and 2002.

Due to the nation’s land tenure system, 97% of PNG’s land is customarily owned. This means all community members must agree to any proposed leases or sales, and official land titles are rare. Since being elected in 2019, Prime Minister James Marape has emphasized the need for land reform and developing customary land. But for legitimate operators, procuring a logging license in PNG remains a long, laborious process involving 34 steps that can take up to four years. 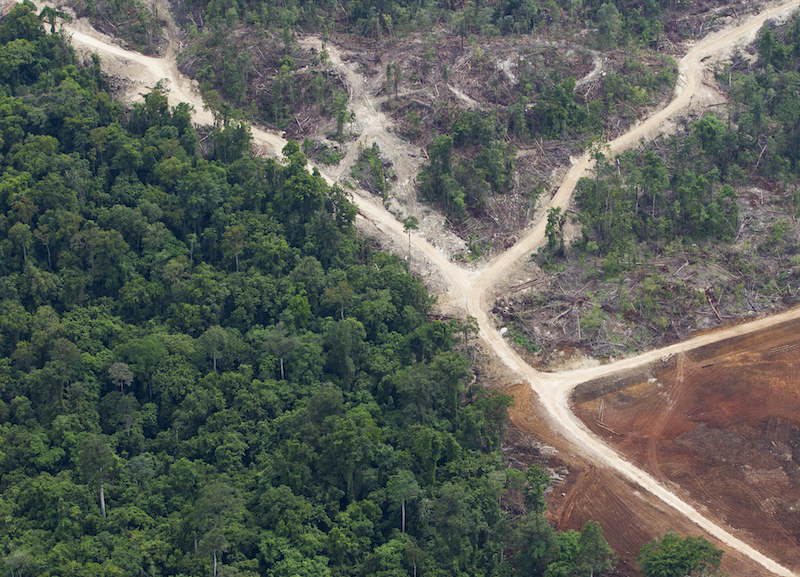 Logging roads in Papua New Guinea’s East New Britain Province. Since the introduction of SABLs in 1996, more than 5 million hectares (12 million acres) of virgin forest have been logged. Image by Paul Hilton/Greenpeace.

However, the introduction in 1996 of special agricultural business leases (SABLs) has long given logging companies loopholes to work through.

SABLs were proposed as a way of speeding up the nation’s development by granting companies setting up plantations or other agricultural businesses quick licenses to use customarily owned land. Instead, loggers used SABLs to bypass the normal license requirements, clearing forests for supposed agricultural projects that then never get developed. Since their introduction in 1996, more than 5 million hectares (12 million acres) of virgin forest have been logged thanks to SABLs, or 11% of the nation’s land.

“SABLs are seen as one of the biggest land grabs that has ever happened in the history of this country,” said PNG activist Eddie Paine.

By proposing plantations and agricultural projects, logging companies can swiftly secure SABLs and, as a result, access to huge areas of PNG’s forests. “These logging companies, mostly of Malaysian origin, currently have licenses of SABL,” Paine said. “Under the pretext of agriculture, they felled pristine forest and went away with the logs.”

“Timber cartels have raped and plundered the Malaysian rainforest, and now they’re in Papua New Guinea,” Juffa told Mongabay. “These are the same characters, the same organizations. They’re just using a tried and true formula that works.”

Paine and other activists started a campaign to raise attention to the problem of SABLs in 2003, but he said powerful interests stopped the campaign from achieving real change. “Politicians were heavily involved in most of these projects. That’s why, despite the numerous concerns raised by affected landowners themselves, by NGOs, by academics, nothing was ever done.”

The government, however, did call for an inquiry into SABLs in 2011. Three commissioners led the inquiry, which cost 15 million kina (about $6.8 million at the 2011 exchange rate) and investigated 72 leases. Two of the three commissioners presented their report, recommending that most of these SABLs were illegal and should be canceled, and the lands given back to the landowners. 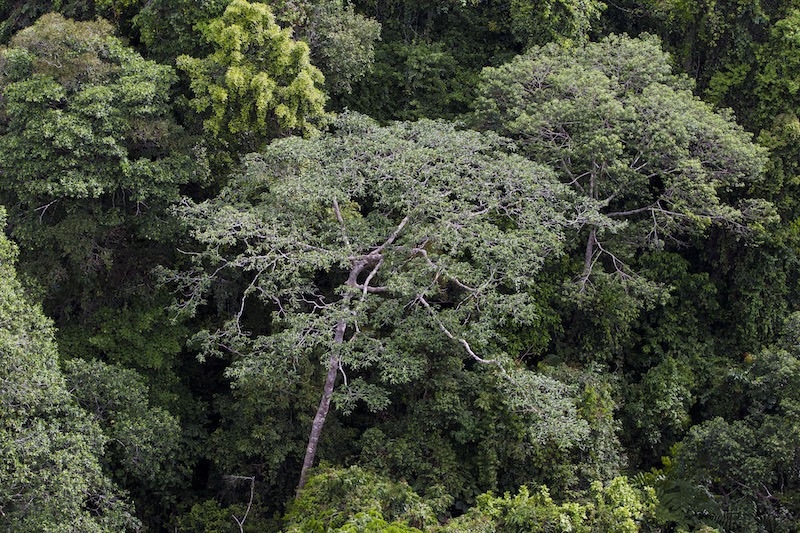 Forest lining the Bairaman River in PNG. New Guinea Island has some of the world’s largest and most biodiverse remaining tropical forests. Image by Paul Hilton/Greenpeace.

However, almost a decade later — and despite then-Prime Minister Peter O’Neill’s 2014 pledge to cancel SABLs used for timber extraction — those licenses remain active. “While the licenses are yet to be canceled,” Paine said, “logs are still being felled and shipped out by these loggers.”

Logging has a devastating effect on the local population, many of whom depend on the forests for their survival. As in Malaysia, heavy logging has polluted PNG’s river systems, impacted local wildlife, and even decimated local cultural sites; Paine told Mongabay that loggers have dug up sacred tribal cemeteries.

Peter Bosip, founder of public interest law firm CELCOR, corroborated these stories: “When leaders try to mobilize their communities to set up a blockade at the entrance to the customary forest site, the company normally engage the PNG police to come on the site, and then the police arrest those community leaders and even harass them, and even intimidate them by locking them up in shipping containers.

“The logging companies use that tactic to suppress the genuine landowners from expressing their rights,” he added.

Juffa said he has little hope for the much-heralded deal announced at COP26 that calls for an end to deforestation by 2030, citing the illegal nature of most logging activity in his province.

Gary Juffa says he has found few allies in government, and faced widespread resistance, as he campaigns against illegal logging in Oro Province and elsewhere in Papua New Guinea. Image courtesy of Gary Juffa.

“Why wait until 2030? Why not just get rid of them now because they’re criminals anyway, they’re already raping and plundering. They’re there illegally. They’re trespassing on traditional land. They’re using state forces, including the police and government agencies, to basically bulldoze their will and win over the people who are land owners,” he said.

Despite being a key component in loggers’ abilities to illegally extract timber from vulnerable nations and liquidate it in cash, most climate finance solutions offered at COP26 did not address the problem of existing corruption.

Juffa said he wants the international community to provide aid to help his country fight illegal logging. Today, such climate finance most often comes in the form of carbon credit schemes, where rich nations or corporations pay for the conservation of a forest to offset their own emissions. PNG joined the Australian government’s Indo-Pacific Carbon Offsets Scheme in November, which aims to create an efficient and accessible carbon market.

“Carbon credit schemes have huge potential, but they have to be carefully managed by each country,” Juffa told Mongabay. “For Papua New Guinea, a country with vast forest resources which are virtually owned by tribes and clans, traditional landowners, we would need very stringent screening mechanisms and a multi-agency system by which entities, organizations, individuals coming into the country supposedly involved as investors, agents, traders, whatever, in this space have to be meticulously screened. And we will also need proper laws to ensure that forest resource owners, the custodians, get the full benefit of any such effort.”

In November, Mongabay exposed a carbon credit scheme in Malaysia’s Sabah in which rights to carbon and other “natural capital” from 2 million hectares (4.9 million acres) of forest were granted for 100 years to a small Australian company with no experience in the carbon credit market. The deal has been criticized for lacking public participation and meaningful consultation with Indigenous landowners.

Juffa said similar agents are targeting the PNG carbon market: “Right now we have carbon cowboys coming into the country, totally excluding people and misleading the governments at various levels, and taking advantage of the fact that Papua New Guinea does not have such stringent mechanisms in place — yet — and actually wreaking a lot of havoc out there.” Juffa declined to name these “carbon cowboys.”

He said he has reached out to “genuine organizations” to position PNG in the green economy; Oro province signed an agreement against the backdrop of COP26 this month with CIFOR-ICRAF, a sustainable land management organization. Under the memorandum of understanding, the NGO has offered advice for positioning PNG on the carbon credit market, but Juffa said no deal has yet been made.

“We have vast forested areas and we would like to have our people, who are the custodians and stewards of these forest areas, to be able to use some of the land that they have available, which has already been used, that needs rehabilitation or needs effort to develop sustainable agricultural activities, so that they can sustain themselves by generating an income for themselves while taking care of these forests,” he said. 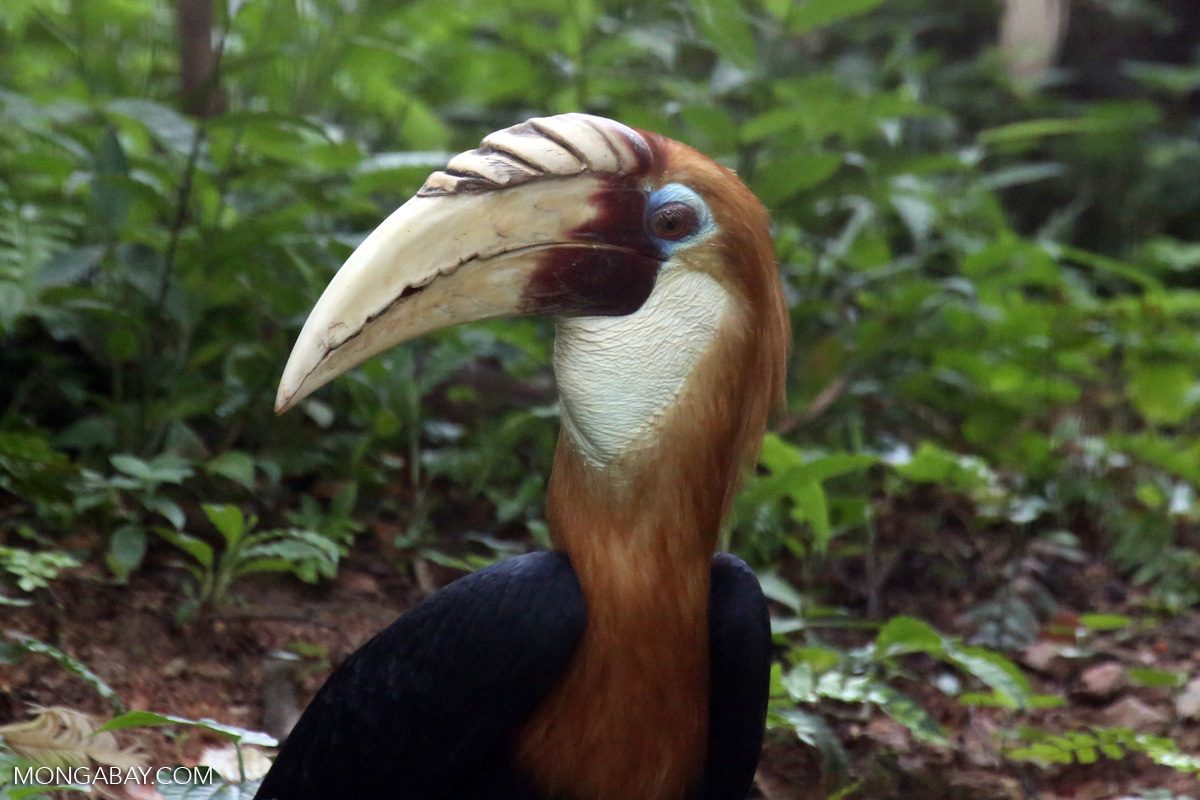 The Papuan hornbill is one of the birds-of-paradise for which New Guinea’s rainforests are famous. Photo by Rhett A. Butler/Mongabay.

Both Bosip and Paine, however, say they’re wary of such schemes being launched in PNG. Bosip said they don’t address the real problem driving climate change, which is the emissions of rich nations: “The demand for resource and the increase in global warming and climate change is attributed to consumption in the developed world. They have to stop this.

“Customary landowners, those living off the forest, must not be involuntarily moved to a site where there is a disconnect between their cultural way of living: moved to a new place and then probably living on food that is actually processed that they will buy from the store, with the money that they earn through the carbon trade,” Bosip said. “Proper research needs to be done to ascertain the extent to which the social impact that this carbon trade will have on the local people before they can proceed into a carbon trade deal.”

“It restricts the people from going into their own forest or doing anything on their land. It restricts yourself from practicing your culture or whatever you do within the forest. You’re foregoing most of your cultural livelihood for the foreign cash economy.

Juffa said he understands their concerns: “They have a point because such efforts have happened in the past where organizations that have come into the country claiming to do good have gone about doing the exact opposite.

“They’re afraid of that because of the damage already having been done by the current carbon cowboys that are operating in the country.”