Frieda river mine will destroy lives and livelihoods 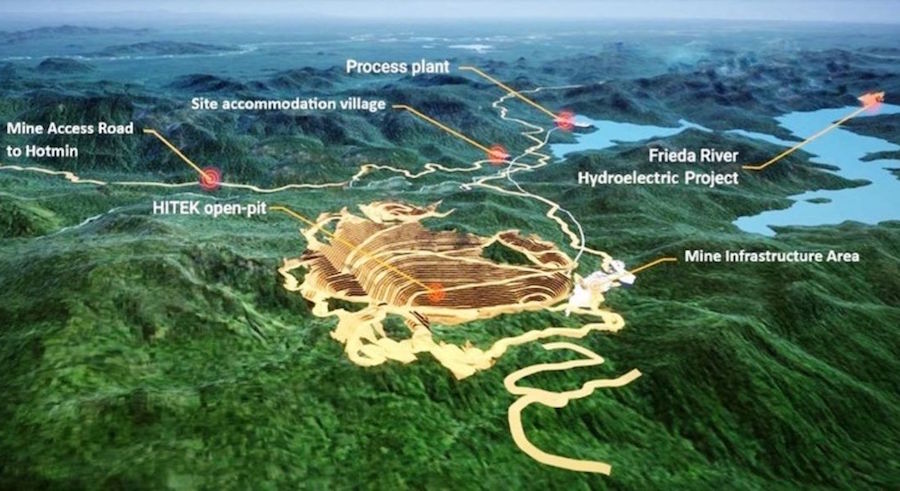 The proposed Frieda River mine complex showing the 123km2 that will be flooded to hold the mine waste rock and tailings and the scale of the mine pit itself. Photo: Panaust

The proposed Frieda River copper and gold mine is set to destroy the livelihoods of thousands of local people who currently depend on small-scale alluvial mining for their jobs and income.

While most of the discussion about the proposed mine has centred on its potential environmental impacts on the mighty Sepik river and the dangers posed by the mine’s waste, there has been little discussion of the thriving alluvial mining industry that will be destroyed.

The issue does get a mention in the Environmental Management and Monitoring Plan published by Panaust in 2018, as part of its Environmental Impact Statement, but it rates just one sentence. Crucially, there is no mention of the fact the alluvial miners will be forced out of their jobs nor of the knock-on effects of the loss of their incomes on their lives, their families, local communities and other businesses in the wider area.

While the presence of small-scale alluvial mining can often alert large mining companies to the presence of gold and spark their exploration activities, it is written that in the case of Frieda River it was the interest of geologists working for Highlands Pacific that sparked local involvement in small-scale mining.

According to Bainton et al (2020)* it was in 1991, that the geologists detected gold in the Nena and Amosai Rivers and advised local residents. It was the geologists who then explained to the locals how to identify and find the gold.

Although alluvial mining was not totally unknown in the area, the revelations by the geologists and the realisation of the potential cash returns then led to a rapid expansion of small-scale mining activity. In 1995, gold was also discovered in the Ok Binai River and, in 2003, at Daptem.

“Over the past 30 years, a lucrative small-scale mining economy has developed in this area, which provides the majority of households in Ok Isai and Wabia village, and various nearby communities, with an important source of income”

Although the combined resident population of the two villages was less than 1,000 in 2019, the total number of people involved in local small-scale mining is significantly higher, according to the anthropologists. This, they explain, is because of inward migration to the mining area and the involvement of surrounding villages in trading networks, provision of labour and supply of food, fuel and other goods.

As a result of the income from alluvial mining activities, and despite their geographical remoteness, local people are comparatively well off in PNG terms and enjoy a higher standard of living than many other rural communities. The gold trade has been central to local development and the alluvial mining sites are described by local people as their ‘ATM’ or ‘bank’.

Although the proposed Frieda River mine will primarily target the area's rich copper reserves, the construction of the open mining pit, processing facilities and particularly the storage of waste rock and tailings behind a huge dam downstream of the mine site will all impact on small-scale mining opportunities.

Crucially, the inundation of 123 square kilometres of land caused by the creation of the dam and waste storage facility, will destroy the villages of Ok Isai and Wabi and necessitate the relocation of their populations. It will also close off access to substantial alluvial gold resources, denying local people employment and incomes.

“Given that many households are thoroughly dependent upon incomes derived from small-scale mining, the loss of this income stream will have severe effects at the household level.”

The loss of the alluvial mining will greatly diminish food security and access to transport and health and education services. Local people will be denied access to the resources on which they rely and will lose substantial cash incomes.

While some local people expect that if the mine goes ahead they will be compensated in perpetuity for the loss of access to their alluvial mining sites and current incomes, the Mining Act actually prohibits the payment of compensation for loss of alluvial rights.

Experience from other large-scale mines in PNG like Porgera, Lihir and Ok Tedi show how insufficient attention given to resettlement and livelihood restoration can cause substantial harm while local communities also bare the brunt of local environmental costs and the social impacts of inward migration and the destruction of community values and traditional norms.

“The experience at every other mining project in the country indicates that pre-existing vulnerabilities will be amplified for many local households and mining-related impacts will not be ‘offset’ by mining-related benefits”.