Protesters unfurl a banner during the men's final, drawing attention to the plight of refugees on Manus Island. Photo: Joe Armao

Police have arrested protesters who managed to get on centre court while unfurling a pro-refugee, anti-Manus Island banner during the men's final of the Australian Open.

Two people, both women, made their way down on to the court and were quickly subdued by security staff, as a banner was unfurled, which read "Australia Open for refugees" with a hashtag underneath saying "#shutdownmanus". The banner was draped over the Kia sponsorship signage just below the front row at the river end of Rod Laver Arena.

The court invasion occurred during the second set, when Novak Djokovic led Andy Murray 4-3, during the change of ends. There was approximately a five-minute delay before play resumed and the players were surrounded by security staff. Murray broke Djokovic's serve in the subsequent game to level the set. 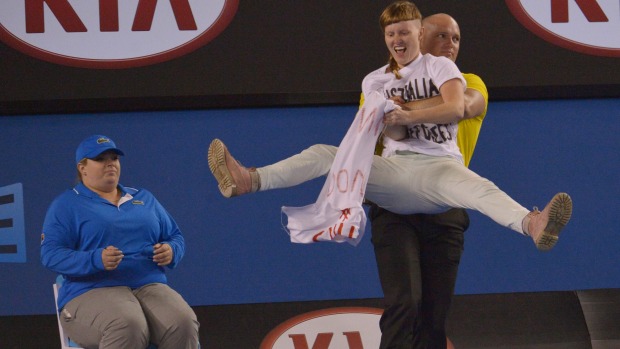 A protester is removed from centre court.Photo: Joe Armao

Australian Open officials said two people had been arrested and that security had reacted immediately, with "minimal disruption" to the match.

A man and five women who were holding the banner were evicted and will also receive an infringement notice and will be banned from the Australian Open, the spokeswoman said.

The Australian Open men's final was disrupted in 2000, when the "serial pest" Peter Hore made his way on to centre court during Andrew Agassi's victory over Yevgeny Kafelnikov. In contrast to this 2015 incident, Hore, who has interrupted several major events stretching back to the '90s, was not making a political protest.