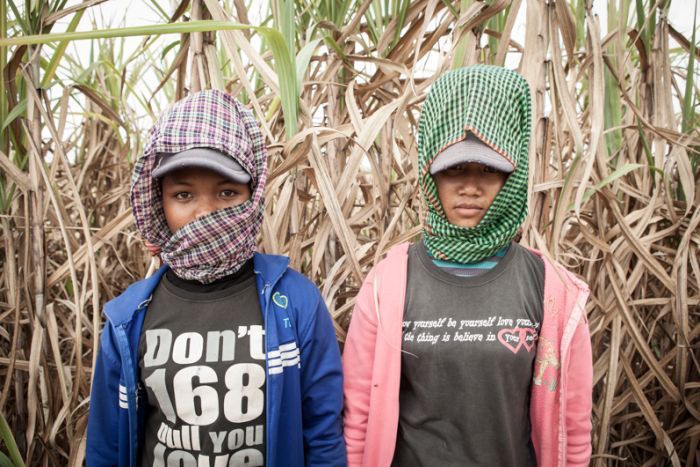 "AS COMMERCIAL BANKS LOBBY FOR ACCESS TO CUSTOMARY LAND IN PNG, THIS STORY FROM CAMBODIA SHOULD SERVE AS A WARNING TO THE GOVERNMENT AND LANDOWNERS ABOUT THE BANKS MOTIVES AND CHARACTER" - ACT NOW!

ANZ has agreed to compensate hundreds of Cambodian families who were forcibly evicted from their land to make way for a controversial sugar plantation and refinery.

Families were evicted from their farms with little compensation, and the project was rife with reports of child labour and unsafe work practices.

"We have experienced huge difficulties with our livelihoods since the sugar company took our land almost 10 years ago, and this contribution will greatly help our situation," said Soeung Sokhom, one of the Cambodians affected by the project, in a statement from Inclusive Development International.

"The whole affected community, including me, are deeply grateful that ANZ has resolved our complaint."

When contacted by the ABC, the bank declined to put a dollar amount on the compensation package for the 1,200 affected families, saying in a statement that it would pay the gross profit from the loan to the victims but that "the exact terms of the parties' agreement remains confidential to them".

In October 2018, ANZ chief executive Shayne Elliott fronted a parliamentary committee and was asked if the bank had pocketed the profit or if it would be used to help compensate those displaced from their homes.

"We haven't done that," Mr Elliott said at the time.

"The profit on something like that would have been quite de minimis [minimal], but that doesn't mean that we shouldn't do the right thing with it."

Eang Vuthy, head of Equitable Cambodia, an NGO that filed an initial complaint on behalf of a cohort of 681 families, said they were "very satisfied" about reaching a solution after almost a decade.

"We found the amount was significant, and could at least help the communities who are now desperately in need," he said.

He said families were especially happy with the acknowledgement by the bank about their suffering over many years.

"It gives them not just a bit of support, but also it's an acknowledgement of the hardship of the people on the ground," he said.

A Phnom Penh Post investigation in 2013 revealed children as young as seven were working at the sugar site, while the ABC reported a woman was killed after being run over by a sugar harvester. 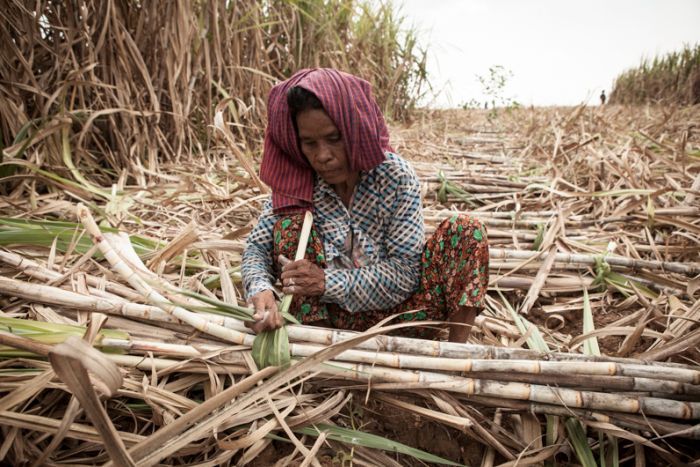 PHOTO: A sugarcane worker in Kampong Speu province. Many villagers worked in the fields for $3.50 a day. (ABC News: Sam Clark)

Mr Vuthy said Cambodians in Kampong Speu province were not consulted about the impending eviction, but were harassed and jailed, and parts of the forest were destroyed.

"People lost their livelihoods because they could not have access to natural resources and the farmland that they use to grow food," he said.

"And as a result of that, their children had to drop out of school, and family members were forced to work for the company on their former land and with little money."

In 2018, Mr Elliott specified that ANZ was a partial shareholder in ANZ Royal and did not finance the clearing of land or the sugar plantation, just the refinery plant.

"That doesn't excuse it at all," he said. "This is a dreadful situation and nobody's proud of the situation that's happened."

In August last year, ANZ finalised the sale of its 55 per cent stake in Cambodian joint venture ANZ Royal.

ANZ was one of the big four banks grilled during the banking royal commission into unethical lending practices.

The Australian National Contact Point, a Treasury body that received the initial complaint, found that ANZ fell short of its own international obligations.

In a statement, ANZ noted "that it is not legally liable for the adverse impacts arising from the land use concession and sugarcane project" but also made "a commitment to review and strengthen its human rights policies".

That move was welcomed by Equitable Cambodia and Inclusive Development International.

"This is considered a bank that operates under a good legal system, like in Australia, so we expect the bank to follow due diligence and practices to ensure that people on the ground are not harmed," Mr Vuthy said.

He added he welcomed ANZ's commitment and was willing to work with them to ensure their human rights approach was in line with OECD guidelines.

Oxfam, which has highlighted Australian banks financing companies accused of land grabs, illegal logging and child labour in the past, congratulated the bank "for doing the right thing".

"We would also like to acknowledge the extraordinary resilience and perseverance of the farmers and their families, who have engaged in this struggle for justice over so many years," Oxfam CEO Lyn Morgain said in a statement.

She said it was clear Australians "care about their banks' lending practices", with thousands signing a petition to call for a zero-tolerance approach to land grabs.

"ANZ agreeing to contribute the gross profit it earned from the loan to the affected families has created an important precedent for the banking sector and we congratulate ANZ on becoming a global leader regarding an agreement of this kind," she said.