One of the promises of a good education is to get a good job and be successful. For those who have got their certificates, diplomas and degrees, the search begins for that dream job. As for folks like me who drop out, well... they look down on us. The education system likes calling folks like me - failures.

Yet people like me are free people. Yeah sure, we can’t afford iPADs, iPhones or iPODs but at least we don’t have someone breathing fire down our throats at the workplace. Maybe we have one or two meals a day but at least we do not have to be slaves of time.

I often wonder why anyone would have a job that cannot pay a living wage such that by the luswik the so called wok man na meri are already begging the buai sellers for dinau. In my recent trips around the rural communities in Madang Province, I have not heard of buai, banana or taro dinaus. I’ve seen villagers enjoy free betelnut and eat large bowls of garden food.

I am now questioning the true meaning of failure or school dropout. Many villagers eat better food and sleep in better homes than primary school teachers, security guards, nurses, lawyers and doctors in Port Moresby.

During my recent visit to various villages in Madang, I have felt like a seriously rich guy. The Bosmun people offered me a lot of betel nut, of fish and sago along with bananas and kumu. At Basamuk the stunning waterfront properties of Terry Kuning and his brother made me salim too many tintings. These villagers have got it good.

I am not surprised that many Papua New Guineans have bought into the materialistic culture of capitalism. Call it modern, chic, cool, western, progress, development or whatever other adjective you want to use to dress up the poverty that is prevalent in the homes of many workers.

Our Union leaders have failed the workers and allowed them to be exploited. Many workers cannot afford to live a decent life that the education system promised. They live like failures... perhaps they really are but their pride won’t allow them to admit it. Union leaders are failing their members.

I am encouraged to hear and read news reports of independent labour movements taking industrial action. Perhaps the greatest news lately has been the strike by LNG workers. PNG LNG workers are the key to the economy of Papua New Guinea.

In fact, PNG LNG workers probably do not even realize that they are the single most powerful constituency in the country. Many millionaires have placed their bets on the success of that project, particularly those in real estate, aviation and construction. A lot of Banks and rich pigs will be screwed if this project were to fail.

PNG LNG workers stand to lose a lot from that project. The fact is that although 10 to 15 thousand workers will be employed in the initial construction phase, only about 1,500 jobs will be available once production commences. Thus, if the LNG workers aren’t getting a good deal now, they might as well call themselves slaves.

Prices of goods have risen astronomically in Port Moresby due to inflationary pressures from the LNG project. Life is pretty much the same at Kaugere, 5 mile, Vadavada settlements even though the LNG project has commenced nearby.

Thousands of people who live in Port Moresby cannot access proper water and sanitation even though there has been economic growth in the country. Why do we have to have continuous power black outs, medicine shortages, school fee increase, etc... even though on paper the figures say the economy is growing?

Why does O’Neil have to beg the Asian Development Back for USD 90 million dinau to build roads when we have recorded economic growth? Perhaps the only people who benefit from such economic booms are those who get massive tax holidays and pay slave wages. Thus the government is poor and the people are poor. That explains why we’re a poor little rich nation 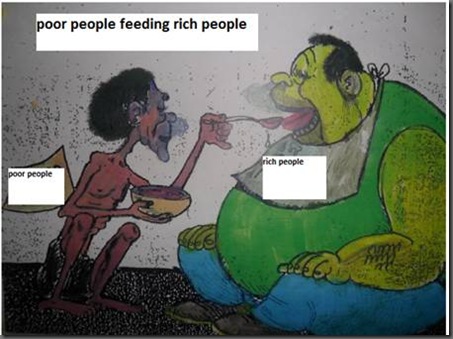 Poor People and their Poor Government making the rich get richer via Tax concessions, cheap wages and Laws and policies made to suite so called ‘investors.’