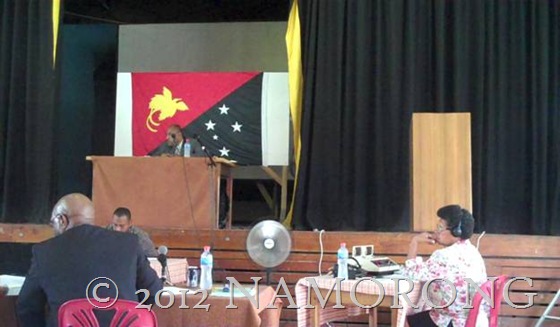 The Commission of Inquiry into Special Purpose Agriculture Business Leases in East Sepik Province began hearings on Day 2 by hearing evidence from witnesses and persons of interest related to Brilliant Investments Limited’s Marrianberg Project in the Angoram District.

Brilliant Investments is a Malaysian company owned by a Mr. Yu (64% shareholder) and a Mr. Ting (36% shareholder). Both men were not present at the hearing yesterday. The company’s project area covers 25 600 hectares of land involving 27 incorporated land groups.

The Commission called up its first witness Mr. Francis Yapo, the Provincial Customary Lands officer to give evidence regarding the Land Investigation Process that led to landowners giving consent for the SABL. Counsel Assisting the Commission, Ms Peipul, was particularly interested as to whether a Land Investigation Report was commissioned for the project. Mr. Yapo however denied any knowledge of any such report.

The Commission then called up the Provincial Forest Officer, Mr. Richard Kali, to give evidence. Mr. Kali told the Commission that a Forest Clearance Authority (FCA) was granted to Brilliant investments on the 7th of May 2009. He said that in 2010, the National Forest Authority suspended all clear felling operations because the company wasn’t adhering to the conditions of the FCA. He added that the Managing Director of the National Forest Authority has indicated imminent suspension of logging due to continued failure to adhere to conditions of the FCA.

One of the conditions of a FCA in relation to Marrianberg is that the company plants its cocoa where it had clear-felled the forest. According to Mr. Kali, the company had failed to fulfill this requirement and only an estimated 60% of the clear-felled area had been cropped. This was the reason for the suspension of the FCA in 2010 and is the same reason why logging at Marrianberg would soon be suspended.

Mr. Tony Hobiagu was the next witness called by the Commission. He is the former Principal Advisor for Agriculture in the Department of East Sepik. The Commission wanted to question Mr. Hobiagu in relation to a letter he had written to the Director of the Department of Environment and Conservation deploring the Environmental Impact Statement (EIS) of the Marrianberg project. In he’s letter, he described the EIS as a “desperation write” with descriptions of the land not being accurate to the locales of Marrianberg.

The Commission final two witnesses were the Chairman of the Landowner Company (LanCo) and the Project Manager representing Brilliant Investments.

Mr. Moses Gawi, the Chairman of the LanCo told the Commission that the LanCo had agreed to transfer the SABL Lease Title to Brilliant Investment. This prompted the Counsel assisting the Commission to question whether Mr. Gawi had copies of shareholder resolutions and minutes of the company Board authorizing the engagement of Brilliant Investments, as well as the transfer of Land Title. Mr. Gawi said the documents were at Marrianberg and he assured the Commission that he would tender those documents as soon as possible.

Mr. Gawi had met the General Manager of Brilliant Investments sometime in early 2006. On the 1st of November 2006, an Agreement was signed between the LanCo and the Investor. On the 9th of March 2007, a Special Purpose Agriculture and Business Lease was granted to Brilliant Investments.

Brilliant Investments has since been exporting logs from Marrianberg. The Commission has requested that the project manager of Brilliant Investments provide it with data regarding the total value of logs exported and a copy of the Logging Marketing Agreement that outlines the benefits to the Former Landowners.

The Commission resumes today to deliberate further into the Marrianberg SABL before shifting its attention to the Sepik Oil Palm (Turubu) SABL.