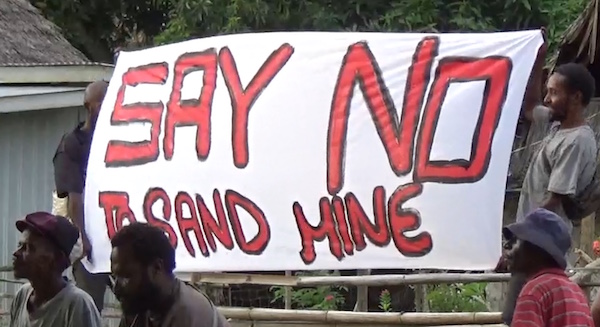 A controversial plan by the Singapore based Powerplus Group, to mine sand along a 38 kilometre stretch of coastline in Madang has been defeated.

The government regulator, the Mineral Resource Authority, has written to mining opponents informing them that the mine exploration application has been withdrawn.

This comes after the sand mining application was met with strong opposition from local communities and environmentalists and concern from local tourism operators.

Local people accused the MRA of having been coopted by the mining company and hurriedly forcing through the community consultation process without allowing local communities to have their voices heard.

Communities were worried thay may have to relocate their homes and that they would lose valuable fishing rights which they rely on for food and income. There were also fears for the endangered leatherback turtles that nest along the coastline and the future of the Karkum Conservation Area.

The community opposition to the mining plans and its potential impacts gained national and international media attention and the background of the company and business people involved were the focus for two investigative reports by the anti-corruption initiative PNGi.

According to the MRA, the amount of negative publicity caused by the mining proposal ‘has caused the parent company to review its position’ and withdraw its application.