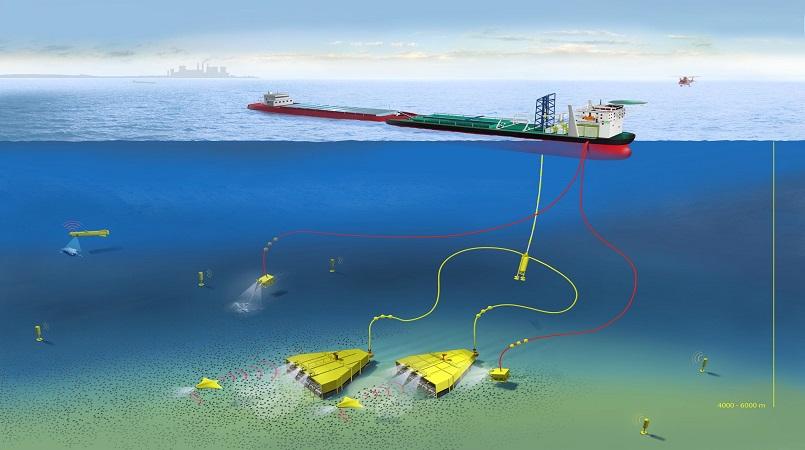 A cost-benefit analysis released by the Secretariat of Pacific Communities (SPC) and the European Union on potential deep sea mining (DSM) projects in three Pacific countries found that the projects can be viable.

But other research suggests there remain serious concerns about the new, untested DSM industry.

DSM involves mining rich deposits of minerals on the sea floor. Some deposits exist as nodules that can be vacuumed up. Others form from hydrothermal vents that spew out minerals over thousands of years, creating rich beds of deposits. These vents sustain unique deep sea ecosystems that rely on the venting chemicals for survival. DSM puts such ecosystems at risk.

It found that mining the deposits in PNG and Cook Islands would yield net benefits, but that the Marshall Islands deposit would not be economically viable.

But Papua New Guinea Mine Watch said the report:

1. Fails to put a monetary value on many of the potential environmental costs;

2. Fails to deal with the fact that billions of dollars in mining revenues have already failed to improve the lives of ordinary people in PNG;

3. Fails to acknowledge the past failure of PNG authorities to manage land based mining and its terrible social and environmental impacts; and

4. Assumes, totally against the evidence, that any environmental damage will be fixed by the mining company.

DSM has been identified as a possible economic “game changer” for Pacific Island countries, the SPC said. The potentially huge increase to GDP for these small nations, which mostly rely on agriculture, fishing and tourism, could end their dependence on foreign aid.

But the future of the industry is uncertain, due to the falling price of resources and untested new technologies. The Cook Islands, for instance, is struggling to attract investors for its deep sea minerals.

There are also many uncertainties about the environmental and socioeconomic risks that DSM might have on Pacific island environments, economies, societies and cultures.

The SPC is running the Deep Sea Project, a €4.4 million (US$4.9 million) joint initiative with the EU active since 2011. Its stated goal is “helping Pacific Island countries to improve the governance and management of their deep sea minerals resources in accordance with international law, with particular attention to the protection of the marine environment and securing equitable financial arrangements for Pacific Island countries and their people”.

The project has aided some Pacific nations with developing deep sea mining laws, which are virtually non-existent around the world.

Recently, China joined that short list, passing a DSM law on February 26. China has indicated its interest in a DSM pilot project in Antarctica — despite a treaty that bans mining there — and a joint expedition with Russia to the Arctic Ocean.

The positive findings of the SPC-EU cost-benefit analysis have fuelled concerns of DSM activists that the EU has other motives. The European Commission is funding a DSM project to develop and test new DSM technologies.

One of the project's industrial partners is DEME. Its subsidiary Global Sea Mineral Resources has exclusive rights for exploration over 76,728km² of seabed in the eastern part of the Central Pacific Ocean.

Despite potential conflicts of interest, the SPC has had to heed the concerns of Pacific civil society. During the DSM Project several countries and other stakeholders have raised concerns about the potential impacts on fisheries “given the extremely high importance of fisheries, including commercial, artisanal and subsistence fisheries, to Pacific Island economies, societies and cultural identities”.

The SPC plans to start an independent assessment of the impact of DSM on Pacific Island fisheries, expected to be completed later this year.

But there are many other concerns besides fisheries, such as biodiversity. A study published in Marine Environmental Research found that hydrothermal vents have unique combinations of species that can vary from one vent to another. The ecological communities at active vents also differ from those at inactive vents.

The study concludes that a mining operation would need a network of protected areas to ensure that the biological diversity can bounce back after mining has stopped. This is at odds with current mining proposals that have single or very few protected areas.

The Deep Sea Mining Campaign's report Accountability Zero critiqued Canadian company Nautilus' Environmental and Social Benchmarking Analysis (ESBA) of its Solwara 1 DSM pilot project off the coast of PNG. It found that the ESBA lacked a cost-benefit analysis, which makes it effectively useless to policymakers. It also:

• rated Solwara 1 against assets, ecosystem services and values that relate to terrestrial mining sites rather than deep sea. For example, it rated Solwara 1 favourably in terms of ground and fresh water quality, air quality, pollination, soil formation and retention, recreational activities such as hiking and bike riding, and loss of agricultural land;

• failed to account for social, cultural and economic values of oceans;

• failed to account for the cumulative impacts of the several deep sea mines Nautilus intends to operate in the Bismarck Sea;

• used a questionable comparison with selected mines on land; and

• rests its case entirely on copper production and omits the analysis of gold production, which Nautilus expects will make up 40% of revenue.

Mining companies are understandably eager to get their hands on the potential profits from DSM. But it is clear there is a lack of understanding of the effects the industry might have, especially on the already vulnerable Pacific Island countries.