The Finance Department Commission of Inquiry uncovered massive fraud involving law firms and senior bureaucrats. K780 million of public money was stolen over a five-year period but nobody has been prosecuted for their crimes and none of the monies have been recovered.

This Thursday, March 5th, the community advocacy group, ACT NOW! is staging a “Birthday Bash” at the Holiday Inn to mark the fifth anniversary of the Commission Report being tabled in Parliament.

“Nobody has been prosecuted for their role in this massive fraud, nobody has gone to prison and none of the monies stolen have been recovered,” says ACT NOW! Program Manager, Effrey Dademo.

“So we thought it is appropriate to hold a Birthday Party to remind everyone that while those people implicated are celebrating the rest of us have suffered a huge injustice.”

The K780 million stolen in the fraud could have been used to pay 5,000 nurses salaries for 10 years or to build 370 new double-story classrooms for our schools or it could have provided 6,200 new rural aid posts or 7,800 new police houses. But instead the money has disappeared into the hands of a few corrupt lawyers and public servants, says ACT NOW!

The Keynote Speaker at the Birthday Bash will be Transparency International Chairperson, Lawrence Stephens, while Guest Speakers include Director of the Institute of National Affairs, Paul Barker and MP Gary Juffa, amongst others.

The Birthday Bash is open to the public but anyone wanting to attend must confirm in advance by email or phone. 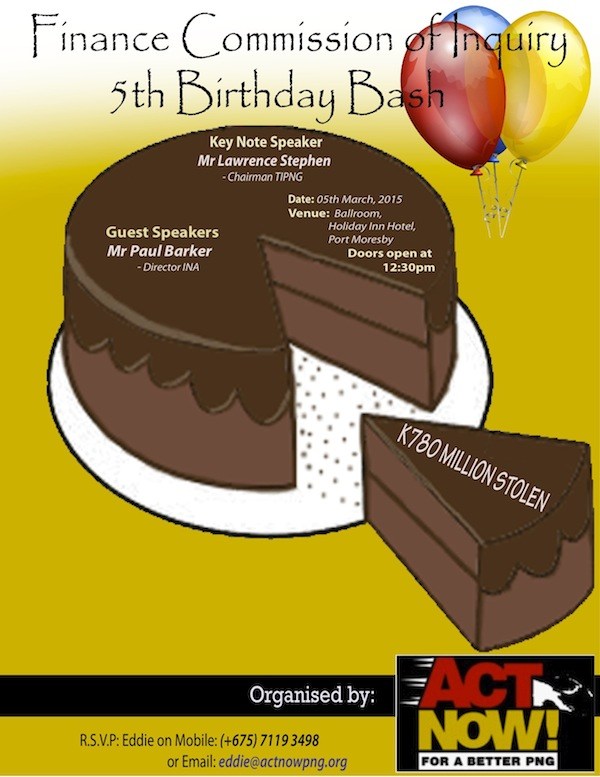