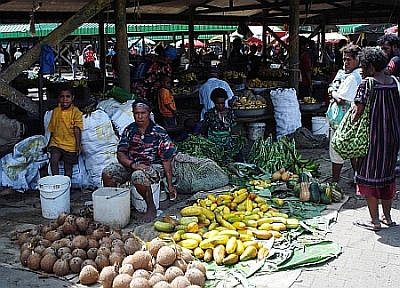 Although Papua New Guinea is known as a resource-rich country, 85 percent of the population depends on the informal economy for a living.

The need for a grassroots-led economic enterprise to aid equitable and sustainable development is nationally recognised, but awaits better governance, infrastructure and facilities.

Meanwhile, the majority of PNG’s population of 6.6 million people practice subsistence agriculture in rural communities, many in locations remote from road and transport networks and public service delivery.

More than half of all income sources, including fresh food production, are part of the informal economy.

But informal agriculture is not confined to the rural provinces. In the capital, Port Moresby, fresh produce markets are growing, supplied by an expanding network of small farms and food gardens in the city’s outer suburbs and villages within commuting distance.

Bire Nikil moved to Port Moresby from Chimbu Province in the highlands to start a food garden several years ago. At Gordons Market, he is surrounded by five of his relatives who assist him with growing and selling kaukau (sweet potato), bananas, aibika (Pacific cabbage), pineapples, peanuts, watermelon, mangoes and coconuts, all transported in by public minibus.

For many market vendors, who are also growers, this is their only source of income and open markets their main outlets.

Ruth Williepore supports herself and her four-month-old daughter by selling freshly grown food at the market every day. She lives on the city’s northern outskirts, where cultivation of fresh produce is collectively organised with families given specific crops to grow and produce taken to market by public transport.

"More people are buying and more people are selling," Williepore added, surrounded by several hundred fellow vendors and an abundance of fruit and vegetables piled on wooden benches, in plastic tubs and on every spare bit of ground.

The ‘2008 Feeding Port Moresby’ study, by PNG’s Fresh Produce Development Agency, revealed that the total supply of fresh food to the city each year is around 57,780 tonnes, with an overwhelming 50,350 tonnes sourced from local urban production and 7,430 tonnes from other provinces and international imports.

Agriculture accounts for 32.2 percent of PNG’s gross domestic product, while industry contributes 35.7 percent. But revenue from the minerals and resources industry, which has contributed to rising national growth over the last half decade, has failed to generate economic benefits or public services for most people.

Nalau Bingeding, Research Fellow at the National Research Institute, claims that the biggest obstacles to the resource boom transforming the pace of development are "corruption in politics and the public service, and a weak public service mechanism."

The informal economy has expanded with the doubling of the population in one generation, while 37 percent remain below the poverty line. Further factors include the decline of the statutory minimum wage, and the kina, the national currency, in the 1990s, which has raised prices of imports.

Globally the informal economy accounts for 60 percent of employment in developing countries. Many informal workers, according to the International Labour Organisation, possess business acumen, creativity and innovation that could be unleashed if conditions of vulnerability and marginalisation are removed.

In 2011 the National Informal Economy Policy was launched to promote "the informal economy as the ‘grassroots expression’ of the private sector and a partner in the formal economic system of Papua New Guinea."

The policy advocates growth of and greater civil participation in the informal economy, regardless of gender, urban or rural location, and ultimately socio-economic inclusion for all involved.

Strategies to empower workers include an enabling regulatory environment, financial inclusion through microfinance and provision of improved infrastructure, facilities, education and training, social protection and political representation. Thus, it is hoped to link "the economies of rural and urban areas and to reduce inter-regional, as well as inter-personal, income inequalities."

At Gordons Market, where there is currently no power, public water supply, inadequate sanitation and refuse management, vendors would like to see changes.

"I would like to see improvements, especially more benches for vendors and power supply," said Miriam, from Babiko village, who works at the market with her mother and two sisters.

"We would also like to see good services for road transport, as sometimes when public transport is not available, we are not able to get to market in time to sell enough."

The size and resilience of the informal agricultural economy is testament to the initiative and creativity of people and communities at the grassroots, but putting in place promised state reforms is vital to its development and long term future.

"The informal economy in the agricultural sector is a booming industry," Maria Linibi, president of PNG Women in Agriculture Development Foundation, claims.

"Women in PNG are entrepreneurs and make do with what resources they have, such as markets, transport, even if it means walking long distances with heavy loads on their backs to the nearest available means to earn some cash," Linibi said.

"But there is," she added, "no proper marketing infrastructure and other facilities in place to facilitate and support the informal sector to boost and sustain its effectiveness."

Market vendor, Nikil, took pride in saying: "We do everything ourselves."

However Bingeding said that substantial PNG-based agricultural research and its effective application, addressing restricted and expensive transport options and developing appropriate technology to prolong the life of perishables, would bring prosperity to smallholders and food gardeners.