“The [Paga Hill] Estate will promote a way of life not yet seen in Papua New Guinea. A secure environment will be achieved not through fencing and guards, but a sense of community that will be fostered amongst residents and visitors alike”. Paga Hill Development Company (2012) 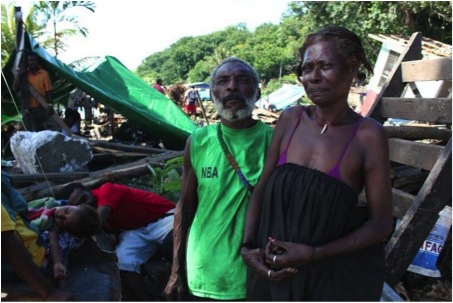 On the 12th of May 2012, Royal Papua New Guinea Constabulary officers attempted to demolish the Paga Hill settlement in Port Moresby to make way for a hotel and commercial complex being developed by the Paga Hill Development Company (PHDC) –  allegedly in partnership with Hilton Hotels (Radio Australia, 14/5/12). Bulldozers destroyed homes, while distraught residents looked on. When opposition leader Dame Carol Kidu attempted to stop the demolition, she was assaulted by heavily armed officers, and frog marched from the area (footage from the eviction can be viewed here).

According to the developer, they have followed due process in obtaining the eviction (Radio Australia, 14 May 2012). Moreover, they suggest their title to the land at Paga Hill is sound. In a press release dated 13 April 2012, PHDC observe:

“Investigations by both the Ombudsman Commission and Public Accounts Committee (PAC) have found no wrong-doing on the part of PHDC, or the associated government entities in issuing the leases over the site”.

This is an interesting interpretation of the Public Accounts Committee (PAC) investigation. In their 2009 report on the Department of Lands and Physical Planning, PAC provides detailed commentary on the Paga Hill site:

As a result of these findings, PAC concludes “that the State has been deprived of Rental payments by the illegal expedient of retrospectively changing the Lease condition and by the failure of the Department to recover the land either by forfeiture or by cancellation of the Lease...Why the Lease has not been forfeited is unknown. Land Rent is in arrears and no development at all has taken place. Non-compliance with the Leasehold improvement covenant and/or non-payment of land rent for six months constitutes grounds for forfeiture”.

I will leave it up to the reader to determine whether the PAC has indeed “found no wrong-doing on the part of PHDC, or the associated government entities in issuing the leases over the site”, as the developer claims.

Of course, that is not to say that the settlers at Paga Hill necessarily have a valid title – this is a matter to be determined. Nevertheless, freelance journalist Catherine Wilson (2012), who visited the community in February 2012, reports:

Paga Hill Settlement, home to about 3,000 people from at least nine provinces in PNG, is situated on customary, or traditional land owned by the Lohia Doriga people in a prime location adjacent to Port Moresby’s downtown business district...At Paga Hill, settlers have been given permission to reside on the land by the traditional landowners. [emphasis added]

The article is certainly worth reading in full.

Clearly, there are a lot of complex legal issues being contested in this case. Not helping matters is the systematic corruption and mismanagement at the most senior levels in the Department of Lands and Physical Planning, documented in detail by the Auditor General and PAC. In this light, it is quite surprising to learn that a major hotel chain such as Hilton Hotels has made an agreement with the developers. They certainly must be confident that PAC’s findings are baseless.

*Kristian Lasslett is a Lecturer in Criminology at the University of Ulster and he sits on the Executive Board of the International State Crime Initiative.

Where are the comments that

Where are the comments that were here previously including the one from the Developers?

Hi Adama, Unfortunately those comments were deleted. We have

Hi Adama, Unfortunately those comments were deleted. We have sent an email to Mara explaining what happened. In future if you have lenghty comments in response to any article please email us at info@actnowpng.org so we can post it as a blog article, with an opener that explains it as a response to a previous blogpost. In this way we avoid accidently deleting comments which come with an outrageously high number of spam comments as well. Once again, our sincere apologies. Effrey.

The effort put into this project is at a greater length and once completed will be of national icon. It will benefit PNG in so many ways and it is my believe that such a big investment is off worth and we should start encouraging and if it means support in whatever we as a country support it. Despite resource boom, yet we are still lacking in major infrastructure development and such project is a must for us. Lets forgoe human rights and so forth to see real development and such project will trigger increase in tourism, employment, tax, etc, etc. Paga Hill, you are not alone!

Hi Actnow team, I am writing on behalf of a woman's rights

Hi Actnow team, I am writing on behalf of a woman's rights network that needs some photos of this eviction. Can you share them for non-commercial use? if so please check you info@actnowpng.org email where I wrote you about this request.