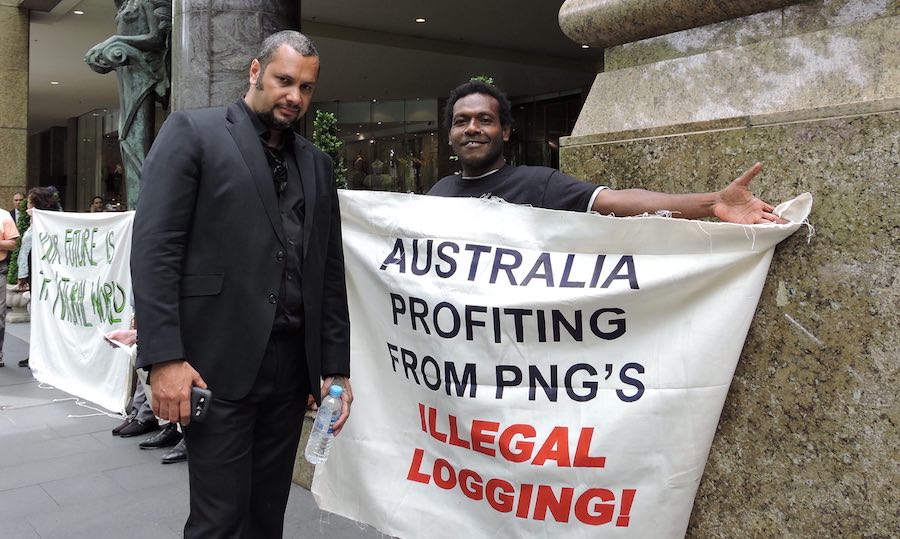 Paul Pavol, with MP Gary Juffa, at a protest outside the Rainforest Summit in Sydney

Mr. Paul Pavol, from the Pomio District of East New Britain, has been awarded the Alexander Soros Foundation Award for Environmental and Human Rights Activism at a ceremony in New York city.

The award recognises Paul’s brave and tireless efforts to protect his customary land after four SABL leases were issued without the consent of local people as part of a huge land grab across Papua New Guinea that has seen rights to more than 5 million hectares of forest stolen from customary owners.

Malaysian logging giant, Rimbunan Hijau has already logged more than 42,000 hectares of forest in the Pomio area, including 10,000 hectares of clear-felling, but Paul is still fighting to protect a further 13,000 hectares from the logging company: Pomio landowners petition against SABL logging.

While many people in Pomio felt powerless to stop logging when they first saw the heavy equipment arrive, Pavol took the lead and became a protest leader, campaigning, setting up road blocks to prevent the movement of logs, and circulating petitions to build support against logging.

"I go around and talk to the people, and advise them and encourage them and support them," Pavol told reporters in New York.

"They said what I was doing is trying to stop development," he said. "But I said no, look, I'm not stopping development ... We all want development, but no one wants to be landless."

Legal cases in other parts of PNG have seen six SABL leases declared illegal by the courts and a Commission of Inquiry recommended in 2013 all the leases be revoked.

But legal actions by Paul and his people are still stuck in the court system so for them the fight for justice fight still ongoing.