In 2008, when a consortium led by ExxonMobil was drumming up support for a $19 billion natural gas extraction and processing project in Papua New Guinea, proponents of the development predicted it would underpin the country’s economy for decades.

Production began in 2014, and now reaches approximately 7.9 million tonnes of liquefied natural gas per year. However, according to two recent reports by advocacy group Jubilee Australia Research Centre, the PNG LNG project has not only exacerbated conflict and inequality in the Papua New Guinea highlands, it has also failed to produce the promised benefits. According to Jubilee Australia’s analysis, PNG’s economy would be better off if the gas had been left in the ground. 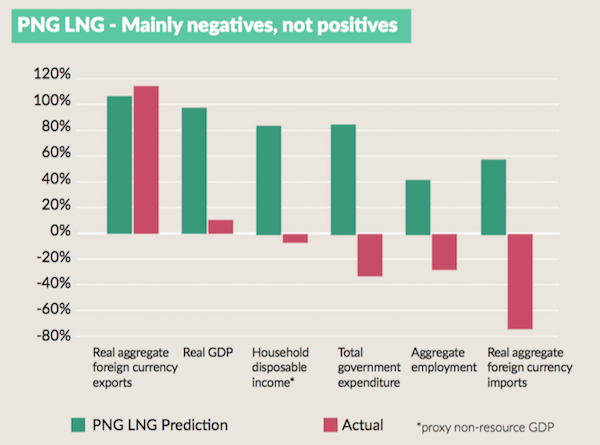 Predicted economic impacts of the PNG LNG project compared to actual impacts (based on Jubilee Australia’s analysis of underlying economic trends). While exports have exceeded expectations, GDP growth has been slower than forecast and income, employment and government spending have dropped. Image courtesy of Jubilee Australia.

When pitching the project, developers made big promises about the economic and social benefits the megaproject would bring to the country.

One influential 2008 study, an economic impact analysis commissioned by ExxonMobil and authored by Australian consultants ACIL-Tasman (now ACIL-Allen), predicted the project would bring a tremendous windfall not only to shareholders, but also to the people of PNG. It forecast the overall size of the country’s economy would nearly double, household incomes would rise by 84 percent, and employment increase by 42 percent.

Backers of the project argued that these anticipated benefits would more than compensate for any adverse environmental or social impacts a giant natural gas facility might bring in its wake.

Instead, says Jubilee Australia, PNG is today worse off than it would have been if the country’s economy had simply continued developing at the same pace as prior to the launch of the project.

“Currently, on almost all economic indicators, the people of PNG would have been better off had the project not happened at all,” report co-author Paul Flanagen, who has served as a senior adviser to the Australian government and the PNG treasury, said in a press statement.

Jubilee Australia’s analysis found that instead of the 97 percent increase anticipated by ACIL-Tasman, PNG’s economy in 2016 was just 10 percent larger than its pre-LNG growth path would have predicted — most of that concentrated in the largely foreign-owned extractive sector. Instead of rising by 84 percent, household incomes fell by 6 percent in the same period, while employment fell by 27 percent.

Even with the moderate increase in the size of the economy, government expenditure to support better education, health, law and order, and infrastructure fell below the baseline by 32 percent, rather than the 85 percent increase anticipated by the ACIL-Tasman report.

Significantly, these decreases came even though production at the facility has exceeded expectations — an increase Jubilee Australia contends was more than sufficient to compensate for the impacts of falling gas prices. 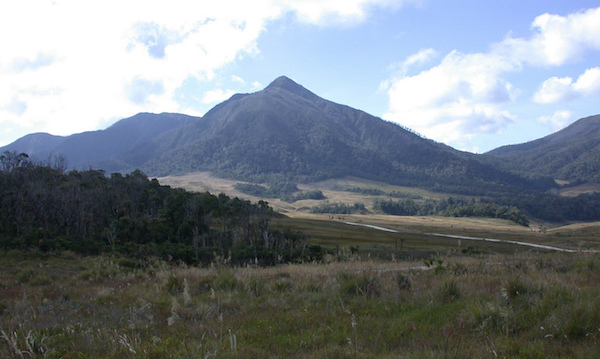 The Tari Gap in Hela Province in the Papua New Guinea Highlands. Photographed in 2003 before the arrival of the PNG LNG project. Image by Ron Knight via Flickr, CC-BY.

The authors point to several factors.  First, they cite “serious flaws” in the economic impact analysis, describing the forecasts as “extraordinarily over-optimistic.”

Government revenue has also fallen short of expectations due to a combination of generous tax concessions offered to the project, and what the report describes as “aggressive tax avoidance” by the companies involved.

“Exxon and Oil Search” — the second-largest stakeholder in the joint venture — “should be paying half a billion [Australian] dollars [$377 million] to the PNG government every year, since the gas started to flow in 2014,” Jubilee Australia executive director Luke Fletcher said in a press statement. “Instead, they are paying a fraction of this amount, partly because of their use of tax havens in the Netherlands and the Bahamas.”

Drawing on an analysis by the Extractive Industries Transparency Initiative, the authors note that the PNG government received more money from personal income taxes paid by ExxonMobil employees than it did from corporate tax from the company.

Further, the report points to “poor policy decisions made by the PNG government in response to the gas boom.” Exuberant spending in the early years of the project led to debt and deficit when the anticipated revenue failed to flow into government coffers.

Landowners, too, have not received the royalties they expected, a problem Jubilee Australia attributes largely to a failure to vet and identify beneficiaries before production began. Clan boundaries were mapped, but the individuals entitled to payments were not specified as part of the original agreement. This, the reports argues, has been an ongoing source of conflict and uncertainty and has fed into violent unrest in the territories around the project.

“During the construction phase of the project landowners had jobs, families had money, and conflict between clans was minimal,” report co-author and anthropologist Michael Main said in a press statement. “When construction ended and people lost their jobs, money stopped flowing, frustrations built up and violent conflict escalated to catastrophic levels.” 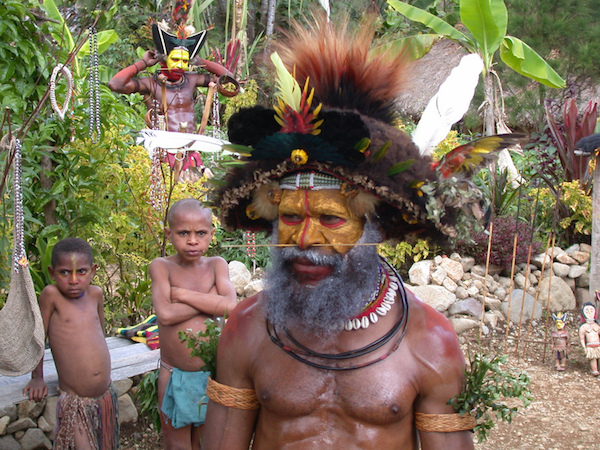 A Huli Wigman and youth. The majority of landowners around the PNG LNG site in Hela Province are from the Huli ethnic group. Image by Ron Knight via Flickr CC-BY

During a May 2 speech in Brisbane, Australia, O’Neill denounced the first of the Jubilee Australia reports as “fake news” and “utter nonsense.” He said he had not read the paper, but accused its authors of aligning themselves with his political opponents.

ExxonMobil and Oil Search, meanwhile, pointed to their royalty payment agreements as well as their corporate social responsibility initiatives, and noted it was the government, and not them, who was responsible for relaying payments to landowners.

“PNG LNG royalty payments due to the government began, and have continued, since the start of production operations in 2014. Payment and distribution of royalties and other benefits due to landowners in the Project is the responsibility of the PNG government and is based upon benefits sharing agreements previously executed between the government and Project area landowners,” ExxonMobil said in a statement to the Business and Human Rights Resource Centre. The company also pointed to its social investment program and its support for humanitarian relief in the aftermath of an earthquake that struck the project area in February.

Oil Search said royalty payments were distributed to the PNG LNG plant site and to traditional landholders in 2017, although it added that “significant payments” were still outstanding. “[W]hat is good for Oil Search is good for PNG. We have a strategic interest in ensuring that we maintain a stable operating environment based on strong and enduring relationships with local communities,” the company said.