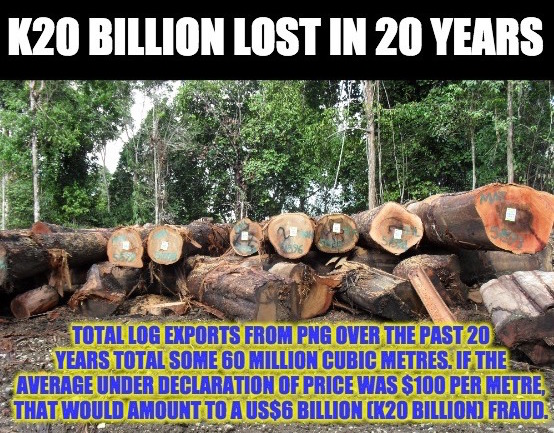 The Forest Authority must stop aiding and abetting logging companies identified by the IRC as defrauding the State and landowners by evading taxes and must prevent them accessing even more areas of forest to feed their criminal activities.

The Internal Revenue Commission boss, Sam Koim, has slammed the logging companies for what he has described as their “pillaging” of PNG’s forests. He says the companies are guilty of “egregious” transfer pricing, “entrenched” tax evasion and “deceptive behaviour”.

According to Koim, logging companies are evading taxes by under-declaring their real incomes and hiding receipts in offshore secrecy jurisdictions. They are also paying “very minuscule” amounts of payroll taxes, despite employing a large workforce, and are draining the government of scarce revenues by claiming large refunds of GST.

The IRC says it is currently auditing 20 foreign owned logging companies and expects to be laying criminal charges, but there needs to be “better monitoring” of the “high-risk” sector.

For too long the Forest Authority has failed to properly monitor the logging industry and has turned a blind eye to illegal and unsustainable logging, including in SABL areas deemed unlawful by a Commission of Inquiry.

But the new analysis from the IRC cannot be ignored. The Forest Authority must stop issuing new logging permits, permit extensions and renewals to these companies. If they do not act then they are knowingly and wilfully aiding and encouraging the companies' criminal activity.

Commissioner General, Sam Koim has given the export of Kwila logs as an example of the type of transfer pricing that he says logging companies are engaging in.

Koim says that when Kwila logs are exported from PNG to China the value declared by the logging company might be just US$110, but the logging company is not selling the logs direct to the buyer in China, but to one of its own overseas subsidiaries, often registered in a secrecy haven. That associated company then on-sells the logs to China for a much higher price, such as US$500. The offshore company then pockets the $390 price difference, depriving PNG of taxes and royalties and allowing the company to constantly claim a loss on its local operations.

In 2020, 282,000 cubic metres of Kwila logs were exported from PNG, according to export monitoring company SGS. If the logging companies were under-declaring their value by US$390, as Koim claims, then ACT NOW! has calculated the total under-declaration would have been US$110 million or around K400 million.

That is K400 million potentially lost on just one species of log exports in just one year.

Total log exports from PNG over the past 20 years total some 60 million cubic metres. If the average price was being under declared by just $100 per metre, that would amount to a US$6 billion fraud.

The figures are just eye-watering and the PNG Forest Authority cannot allow the logging companies to continue to engage in a fraud on such a massive scale.

The government must step in and say no more logging permits or permit extensions until and unless the company involved has been given a clean bill of health by the IRC.

If the Forest Authority, Board and Minister do not act then they are simply encouraging and assisting the logging companies egregious and criminal behaviour and their pillaging of our forests, as described by the IRC.